2x Classic Physique Olympia champ Chris Bumstead reflects on the 2020 Olympia, winning the show, and how everyone looked on stage 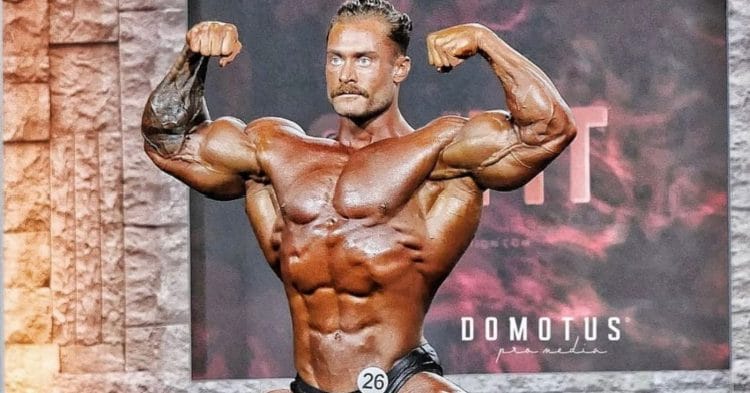 Heading into the 2020 Classic Physique Olympia, Chris Bumstead looked better than ever before. Now he reflects on winning the show, and how much everyone had improved.

Heading into last year’s Olympia, there was a lot of talk about the Classic Physique division. While the division had not been around for very long, it seemed to have matured into its own over the last couple of years.

A big part of what makes that the case, is the likes of Chris Bumstead, who won the show in 2019, beating Breon Ansley by a single point. It was a closely contested event, and added fuel to the exciting rivalry between these two athletes.

Chris Bumstead Got A Perfect Score

By the time the 2020 Classic Physique Olympia was over, Chris heard the words. “and still” and walked away with a perfect score. Speaking in a recent interview, he described what it was like to hear those words and receive a perfect score.

“It felt really good, and it was a much different feeling than the year prior,” Bumstead explained.

“This year coming in, it was honestly the moments in peak week in the hotel or our Air BnB, posing with Iain, doing my check-ins, and I started to see how different I looked from the year before.

“I knew how much tighter I was. I saw how my back and arms came up, and it was just like an evolved version of my physique and I believed that I made drastic changes.

“I didn’t notice them until that peak week, and seeing those there, I was like ‘Holy f–k, I did it.’ Leading into the show, it was like this constant rise of pride and excitement that was capped off by hearing ‘And still’ at the end.”

From there, Chris Bumstead explains that he actually got to live in the moment for this Olympia, instead of worrying about where he will place. So the moment he was awarded the win, it was instantly a moment of relief.

“Hearing ‘And still’ was just the icing on the cake of it all, being like this is where you belong, this is what you deserve.

Last year it was one point that I won by, this year I finally got that perfect score I was working towards, the five across the judging panel. It just felt right, so it felt really good.”

As clear as it was that Chris Bumstead was the rightful winner of the 2020 Classic Physique Olympia, that is not to say everyone else looked bad. It was quite the opposite actually, as everyone seemed to have improved.

In the moment, Chris was too focused on his own physique and what he was doing, to pay attention to how everyone looked. However looking back, he says that particularly Terrence Ruffin and Breon Ansley, who scored 2nd and 3rd respectively, looked great.

“Looking back, I definitely saw that,” Bumstead said.

“After analyzing pictures and everything afterwards, I could see everyone made some crazy improvements from the year before.

“I think Terrence made some of the craziest improvements, given me and him had more room for improvement.

“Breon is a little older, and his physique is pretty much physique. He’s at the cap of his weight class so it’s hard for him to make changes, but he still managed to make some crazy changes.

“I don’t know how he’s done it, because he’s been at the cap of his physique for three years now I think, and he keeps looking better every single year, so that’s crazy.

“It was pretty awesome to see just how wild everyone looked up there, and just how much this division has grown.

“If you took the first Classic Physique Olympia that happened, and you compare that top 5 to now, the evolution of the class is absolutely insane in that amount of time and it’s not slowing down.

“So it’s definitely a really exciting division right now and I’m grateful to be a part of it.”

The Classic Physique division celebrates the old school era of bodybuilding, putting focus into those types of classic aesthetics. This is something that Chris represents quite well, as his two Olympia titles will tell you.

However interestingly enough, it is not exactly Chris’s focus to win the shows. In fact, he just looks to capture what it means to be Classic in the best way he can, and bring that to the stage.

“I felt that when I woke up on that morning and the week prior, posing, the confidence I felt, the presentation I knew I was going to bring, the conditioning I had, and the improvements I made, I truly believed I was embodying what it meant to be Classic Physique Mr. Olympia.

“Win or not, I felt like I would be respected as such, and that I proved that to myself.”

Chris Bumstead certainly does not do a bad job at representing what it means to be a Classic Physique Olympia champ. It will be fun to watch how long he can keep his reign as king in the division.