Have to see it to believe it?... no problem! 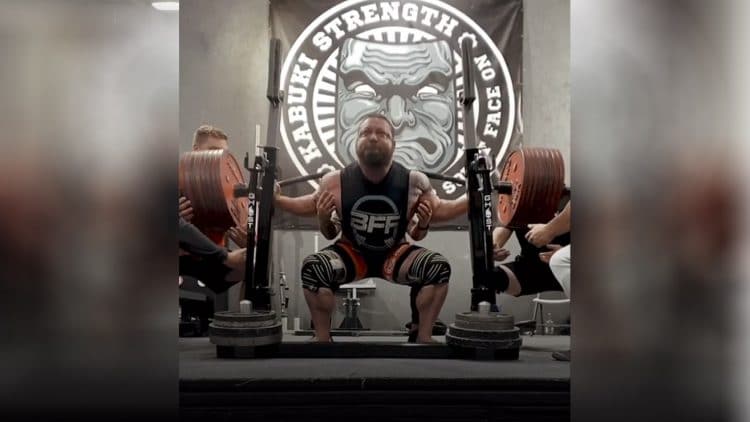 Powerlifter Chris Duffin is certainly no stranger to squatting poundages that defy human limits. Heck, just a little over a week ago he achieved a 980lb squat for 2, and at the age of 42 well… there are words to explain how impressive this is. And to think within the same month he’d squat 453.6kg/1,000lbs for a double really solidifies his badassery status.

To do this once is crazy enough but he went ahead and tried for another which turned out to be a good move on his part because now he has bragging rights and the video proof at that.

On Instagram, he wrote the following to accompany the video…

Check out his 1,000lb squat for a double below… that’s a whole lot of plates!

We definitely think he can achieve whatever he puts his mind to because at this point why the heck not. His goal is to achieve more depth than what was seen in the video and to beat this performance by one repetition at the IHRSA show in March which will take place in San Diego, California.

Duffin explained that this will be the conclusion of his Grand Goals campaign when combined with his “nearly 3 reps at a 1000lbs deadlift a few years ago,” which will be his final “feat of strength”.

I plan to squat 1000×3 this coming March at the IHRSA show in San Diego. This will be the conclusion of my Grand Goals campaign when combined with my nearly 3 reps at a 1000lbs deadlift a few years ago. It will be done just a few weeks shy of my 43rd birthday and also be my final “feat of strength”. This is a culmination of over 30 years of training and working with some of the best minds in the world on rehab/prehab, recovery and training modalities. I couldn’t even attempt this without the knowledge and support of the Kabuki Strength Team who are directly responsible for managing my training, recovery, and much more. Wish me luck and I hope you’ll follow along as I train to squat 1000lbs for a triple.”

To put into perspective just how impressive his 1,000lb squat for a double is, the all-time world record raw squat is 490kg (1,080lb) which was set by Ray Williams in 2019 at the USA Powerlifting Arnold SBD Pro American.

You can watch that here…

But we seriously look forward to seeing if Duffin will achieve this 1,000lb squat for 3 in March. It’s definitely going to be a challenge and based on his double which looked very challenging; it’s not going to be an easy feat with that much weight on his back.

We, however, wish him the best luck and truly hope he’s able to accomplish this amazing feat of strength safely which would be an amazing birthday present to himself.