The legendary Flex Wheeler recently sat down with Patrick-Bet David in a recent interview where many personal and bodybuilding-related topics were discussed. But at one point in the interview, the topic of Olympia management and the future of the organization came up regarding who will take it to the next level and make it more appealing to the competitors.

He then explained how Joe lost a lot of money every year in the sport and how both Joe and Ben Weider had a marathon like mentality in that their strategy would pay off moreso down the line rather than right now.

Flex Wheeler didn’t quite have the same thought process back then and he regretted it dearly because there would have been some serious money to be made if he had not had the spring mentality.

“He always wanted the sport in the Olympics,” Flex said. “I actually didn’t want to be in the Olympics, I was against it and I was wrong. I should have wished for it because yeah you’re an amateur and you don’t make any money.

But the money you can make after that I was thinking short term because I need money now I don’t want to compete in a show and put my body through abuse and then hopefully, someone liked me and marketed me. I wanted immediate gains and gratifications because I had immediate bills.”

He then went on to explain how Arnold Schwarzenegger may be the closest thing to Joe Weider with his amazing accomplishments in the sport.

“He has taken broad steps to try and change it (bloated guts) which made some changes the following year but anyone else, not even on the radar. Not to my knowledge”.

But under current IFBB President Rafael Santonja who was elected in 2006, the IFBB has already had its competitors participate at the 2019 Pan American Games and in 2020, we’ll see many of the IFBB’s amateur athletes compete in several Olympic sanctioned events.

Moving forward, Santonja is doing a great job of pulling for the sport’s involvement in Olympic competition as he’s already involved in meetings; which should be exciting for athletes and fans of bodybuilding and fitness.

You can watch the entire interview below or skip ahead to the 1:02:00 mark where Flex Wheeler talked about the Olympics. 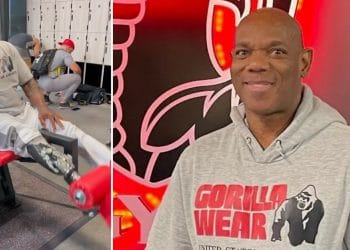