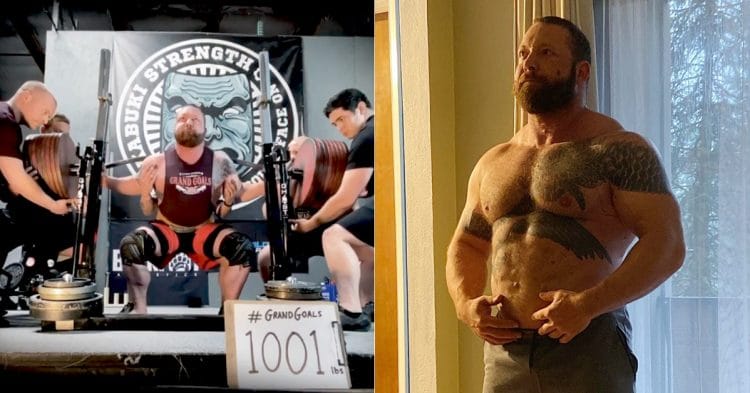 Chris ‘Mad Scientist’ Duffin needs no introduction. He’s one of the greatest powerlifters in history and is known for having both a huge squat and a deadlift of more than 900 pounds. Just in January, Duffin squatted a massive 1,000 lbs for a double which was his first time ever squatting 1,000 pounds. Then just a month later, he nearly passed out squatting 1,015 lbs but he completed the lift nonetheless.

Now, Duffin already deadlifted 1,000+ pounds for 2 reps in 2016 back and he wanted to become the first man to squat and deadlift 1,000+ pounds for reps. Well, his most recent feat accomplished that for him when he squatted a colossal 1,001 pounds (454kg) for 3 reps. He planned for this day years ago and has finally achieved it!

The goal was to do something epic and raise money for causes he’s passionate about. Duffin explained that it was “now or never” for him with the current events and all the training he has put into this. He originally planned to perform this lift at the IHRSA show in San Diego, California however, the event was shutdown.

So he moved it to the Kabuki Strength Lab in Clackamas, Oregon and became the first man to ever squat and deadlift 1,000+ pounds.

“1001×3 squat today. Despite all the uncertainty in the world and our lives right now, I set out on a clear and defined path 4 years ago. A path to do something epic, to inspire, and to raise money and build awareness for causes I believe in. It was a major battle for me in the last year to pull off the last portion of this goal. With where my body, mind, and health are…there was no way of repeating this training cycle again after current events pass. It was now or never.

With the original event at IHRSA in San Diego shutdown along with everything else, we adapted to the changing circumstances. I was going to finish what I said I was going to do. Commitment, perseverance, victory. It’s how I live my life and hope to inspire in others. If you are going to talk the talk, you must walk the walk or your words are no different than the sound of the wind.

Words can’t accurately convey how challenging this training was mentally, physically, or emotionally…but I can say I’m proud to have finished things on my own terms. Yeah, it’s not recorded in any record books anywhere, but I don’t give a rat’s ass… my goal was to be the first person to deadlift and squat 1000+lbs for reps. I did it, and no one can take that away. DONE”

Duffin was extremely proud of this performance as he achieved his big goal and he didn’t care if it was recorded in any record books! And to do this at 42 years of age is incredible in itself.

“I plan to squat 1000×3 this coming March at the IHRSA show in San Diego. This will be the conclusion of my Grand Goals campaign when combined with my nearly 3 reps at a 1000lbs deadlift a few years ago. It will be done just a few weeks shy of my 43rd birthday and also be my final “feat of strength”. This is a culmination of over 30 years of training and working with some of the best minds in the world on rehab/prehab, recovery and training modalities. I couldn’t even attempt this without the knowledge and support of the Kabuki Strength Team who are directly responsible for managing my training, recovery, and much more. Wish me luck and I hope you’ll follow along as I train to squat 1000lbs for reps.”

This is huge for strength sports history and Chris ‘Mad Scientist’ Duffin has certainly raised the bar with this incredible feat!