Things got pretty interesting and a bit crazy in the Thunderdome with WWE wrestlers Sarah Logan and Raymond Rowe! 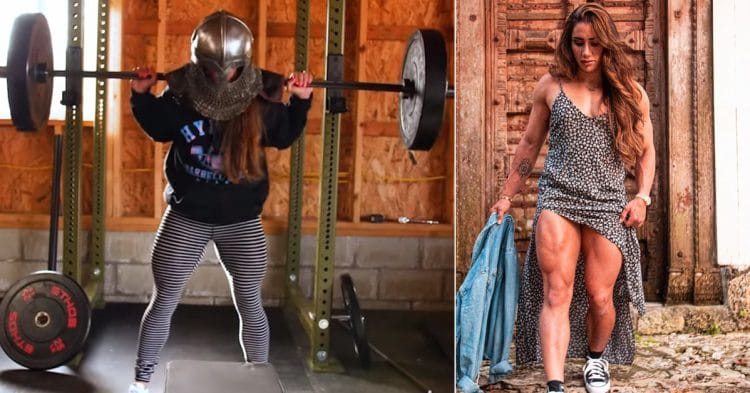 She’s also a DPT who is very knowledgeable about training, offering advice on her YouTube channel. But it seems like she’s enjoying her time as an elite strength athlete by taking on any and every challenge that comes her way (she does hold her own).

The powerlifting elite recently trained with Strongman legend Eddie Hall and also took on a CrossFit workout with top CrossFitter Brent Fikowski to name a few of her most recent collaborations.

And a few weeks back, Cohen joined WWE wrestlers Sarah Logan and Raymond Rowe (Ring name is Erik, who’s one half of tag team ‘The Viking Raiders’) for a session in Logan’s Mad Max-inspired Thunderdome (gym)! The video definitely started off very interesting which involved spears, shields, getting knocked on the head with an ax (made for an awesome ‘ding’ sound) while wearing a helmet and finally, the workout.

Before the actual workout though, Logan talked a little about how she doesn’t like wearing makeup as a wrestler. So she went to Chairman and CEO Vince McMahon and told him she didn’t want to wear makeup anymore. McMahon agreed that her face was expressive enough without it.

Then Rowe told a story about how his brother (lives next door) locked himself out of his house and had to break the window to get back in after helping Rowe bring back a deer that he’d just hunted.

Then it was time for the workout. The session involved doing several exercises every minute on the minute (EMOM) with 10-15 reps each. The movements included back extensions with weight, kettlebell burpees, pullups, and the sandbag carry for 3 rounds.

The video ended with some footage of them engaging in the same Viking-inspired activities in a different gym which involved swords, axes, and shields.

Stefi Cohen faced off against Marcelo Nieto in her second Pro boxing match on the Fight Night 3 Hafthor Bjornsson/Devon...