CJ Cummings blows away his own personal best in the clean and jerk, coming close to beating the world record. 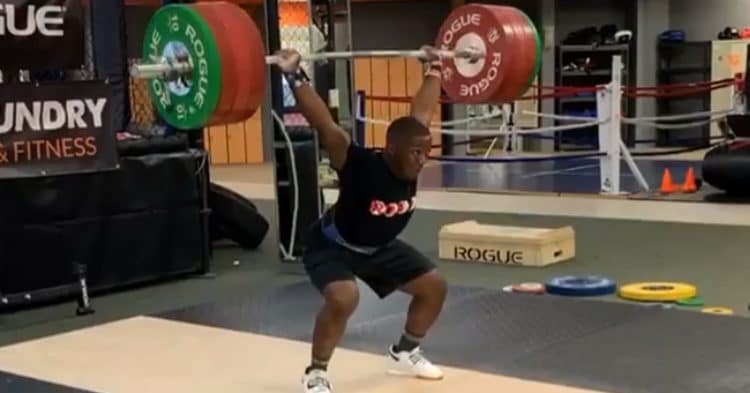 Junior powerlifting champion CJ Cummings sinks another personal best with his most recent clean and jerk at 429lbs/195kg. The lengths some will go to for a PS5.

This, according to an Instagram post where he asked his girlfriend what he needed to do to get one. She marked herself as a champion girlfriend when she did, saying, “Go clean and jerk 195.”

And so he did.

Some might say that earning a new PS5 is harder than earning a record-breaking clean and jerk, but that didn’t stop CJ Cummings from trying. It seems to be his motto, to just go for one more kilo each time, an amount that equals just over two pounds.

Whether or not a new PS5 is on the way for Team USA member CJ Cummings remains to be seen, but he’s certainly earned at least that to pass time in between training sessions while putting himself on the map as a record-breaker. And he just turned 20-years old.

A clean and jerk is a weightlifting movement that involves two movements in one and is performed with a barbell. In the clean segment, the athlete lifts the barbell off of the floor to racked position, without resting it. The jerk movement follows as the athlete raises it to a position above the head, ensuring the arms and legs are straight.

It’s a movement that makes it to the Olympics, as the finish of the arms and legs is required to be along the same zone as both the torso and barbell. That’s what makes it clean, with the jerk. For Olympic events, the snatch is added to the movement, which entails lifting the barbell over the head in one clean movement.

Twenty-year-old CJ Cummings is considered a once-in-a-generation weightlifter by his hometown in Beaufort County, North Carolina. He’s been beating records since he was a teenager, and has miles to go before he slows down.

This week’s 195lbs clean and jerk by Cummings was just three pounds shy of the record holder Shi Zhiyong in the same 73kg class, whose clean and jerk is 198kg/437lbs. Zhiyong from China is a 27-year-old three-time World Champion who currently holds 10 world records.

It looks like Cummings is set to give him a run for his money. Cummings was headed for the Olympic Games Tokyo 2020, but is now training for the skill of patience.

In the meantime, he has his sights set on 2021, and this week’s clean and jerk achievement will certainly inspire him, while worrying his competitors at the same time. He will be certainly comparing this week’s record with his Pan American achievements which rang in at 153kg/ and 191kg/ in the clean and jerk.

His strategy is to increase his bests by one kilo at a time, according to his Team USA bio. It’s clearly working.

Rory Van Ulft, a 9-year-old gymnast and weightlifter, made history recently by becoming the youngest person (men and women) in...