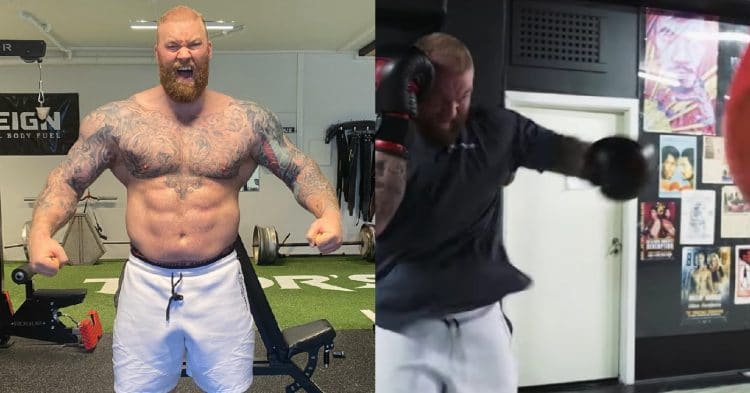 Hafthor Bjornsson has been making some big changes to his training style as he prepares for his boxing match with Eddie Hall. His most recent update sees the progression in his training, and he has made some big improvements.

At the start of his training, Bjornsson was honestly looking somewhat rough. He had clear natural power, which is to be expected from a strongman athlete his size, but his cardio was horrendous and his technique was not much better. Nevertheless, he kept grinding away in the training room, and the results started to show themselves as he dropped serious weight, and his cardio and technique began to improve.

Most recently, Hafthor Bjornsson had his first boxing training session since the birth of his baby son. The video of the session, which he uploaded to YouTube, sees the Icelandic champion drilling technique and hitting the heavy bag. It is not the longest training session, which he explains by saying that he had another session earlier in the day, but it does a great job displaying the growth and improvement in his development as a boxer.

There is a clear jump in how Hafthor’s hand speed looks and how his technique is, compared to when he first started this journey. Not to mention the massive increase in his cardiovascular output, with his bodyweight being down to about 168kg (370lb). He even has his trainers talking about how impressed they are with his progress, and how he has improved all around.

“This is a nice journey. There are not a lot of athletes that dare to step this much out of their comfort zone. To go from being a professional, I was the best in my sport, to go from my sport to a completely new sport and to show the world me, as a beginner in a new sport. Not a lot of people would dare to do that, but I like challenges and this is just exciting for me. I’m excited to see the progress. I’m excited to show everyone what I can do.”

After the training session is over, Hafthor Bjornsson takes some time to reflect on his progress and how things are coming along. He says that with just under 12 months left to prepare, the best is yet to come. However he is satisfied with how things have progressed, and frankly it is hard not to agree with that.