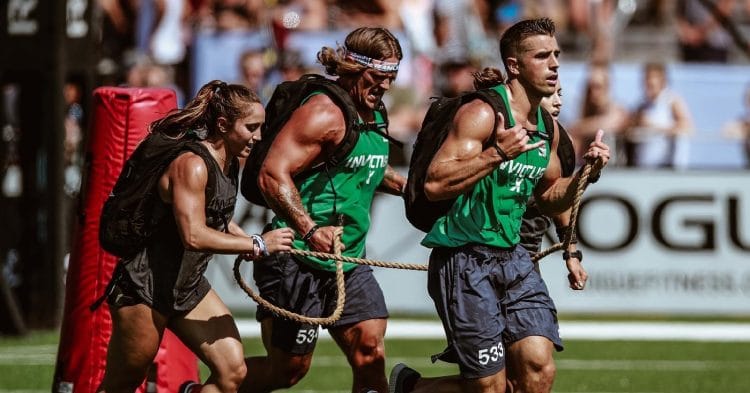 CrossFit Mayhem Madness is expected to give CrossFit team competitors the ability to compete, now that there will be no team events at the CrossFit Games. Now some of the major details of the event have been revealed, and it promises some big things for fans and athletes alike.

Given the fact that teams will be unable to compete at the Games this year, athletes were looking for a new way to put their skills to the test. That is where defending team champions CrossFit Mayhem decided to step up and offer an outlet for these competitors. They revealed that they will be hosting the Mayhem Madness event, as a pseudo Games contest, allowing the teams that would have qualified through the Sanctionals, as well as three additional teams, to compete for a prize and the unofficial title of fittest team in the world.

Now a recent Instagram post from Team Mayhem leader Rich Froning has revealed some major details from the event. First and foremost it revealed that the CrossFit Mayhem Madness event will take place from August 2-9, in Cookeville, Tennessee and surrounding areas. He also explained that there will be an online qualifier, at a date not yet decided, to allow for three additional teams to qualify, alongside the 9 who earned their spots through the Sanctionals, making a total of 12 teams competing.

By far, the biggest surprise from this announcement comes in the revelation that there will be an “event draft” which will take place once the online qualifiers conclude.

Sometime in June, a list of potential workouts will be revealed, for the CrossFit Mayhem Madness contest. From there, the teams who are qualified for the event will be assigned draft picks, similar to other sports. Then they will take turns picking the workouts they would like to see in the contest. Each team will receive at least one pick, with the #1-5 teams getting an additional turn.

There are still a ton of details have been yet to be finalized, such as the dates of the online qualifiers. However what we do know tells us that CrossFit Mayhem Madness will be a unique experience for both athletes and fans. The full Instagram post reveals the scheduling format for the contest, and some other details that may be of importance to you.

Additionally, you can stay tuned to FitnessVolt, where we will provide important updates as they develop.

9 Weeks to a Bigger Deadlift Program