Cynthia Arnold Runs 3:11 Marathon With Three Kids In A Stroller 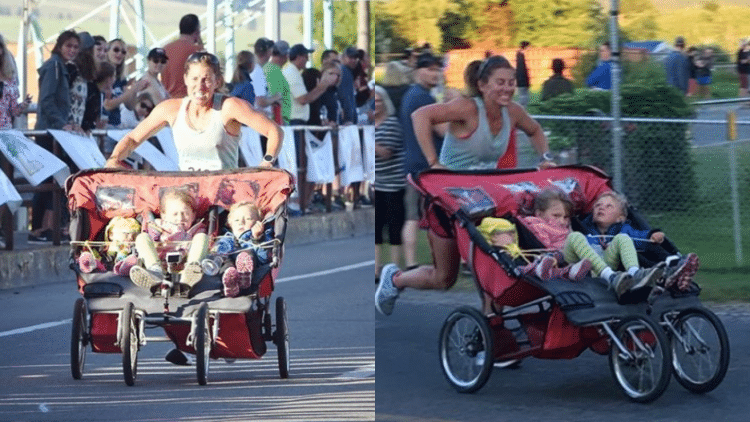 Cynthia Arnold is no stranger to running marathons. However, this time she did so while pushing her three children in a stroller.

Arnold is a 35-year-old mother of three, who has a passion for fitness. Before having kids, she used to love running marathons. However, she did not let that change, once she had those kids. In fact, she just chose to bring them along with her.

In 2018, Arnold set a Guinness World Record for running the fastest half marathon, while pushing a stroller of three children. This was something that she managed to do with an impressive time of just over 1:28. Moreover, this happened at the Missoula Half Marathon in Missoula, Montana. Nevertheless, she was not satisfied there.

Shortly after completing this half marathon, Cynthia Arnold began to train for a full 26.2 miles. As she told Men’s Health, she started a series of 20-mile training runs, alone. Furthermore, she would also take the kids sometimes, albeit for only 10 miles, with a one-time 17-mile run.

Then it was time for her to try the full marathon.

Arnold took to the Missoula Marathon this year, with her kids in tow. Despite the fact that the kids were older and bigger, she was not deterred. With the three kids and the stroller added together, she was pushing around 180lb along the way.

The goal that Arnold was looking at beating, was the Guinness Record of a 4:06 marathon. However, when the race was over, she completely destroyed that score. When she pushed her way across the finish line, she clocked an impressive time of 3:11. This put her in the Guinness Book of World Records for both fastest half marathon, and full marathon, while pushing a three-person stroller.

Following the race, Arnold was ecstatic.

“The crowd was amazingly supportive,” she said. “I was moved by how many people were cheering for me and knew what my goal was on race day. One woman called out ‘I’ve been reading about you all year. Go mom!’”

Moreover, she is advocating for other moms to try running with their strollers.

“Running with the stroller has so many benefits for running parents. Those of us who run know how much it is a part of our identity. You can’t just give that up if you become a parent. The stroller gives one the freedom to carry on a lifestyle with new ones in tow.”

Congrats to Cynthia Arnold for setting this new world record, and being an inspiration to mothers everywhere.

Bev Francis is something of a legend in the world of strength sports, owning one of the most famous gyms...

It has been proven over and over again, that no matter how old you are, it is possible to keep...