The vacuum is an excellent exercise which more people should know about!

Who would have thought that sucking in your stomach could actually help you to reduce waist size, in addition to tightening up your core muscles to achieve a better-looking midsection?

Well, it turns out that this ancient (ok, maybe it’s not that old) technique was a staple core exercise for many (and likely all) of the bodybuilders of the “Golden Era”.

And if you have any recollection of the days when 3x Mr. Olympia Frank Zane (1977-1979) competed, then you’ve probably seen this awesome pose in action.

However, bodybuilding has undoubtedly forgotten about this valuable tool and that’s likely due to the progressively larger physiques which have moved away from the more classic look.

What Is The Vacuum?

The vacuum is pretty much sucking your stomach in as much as you can while holding this position for an amount of time; which actually strengthens the deep core muscles (transverse abdominis and internal obliques) to allow for a more permanently aesthetic midsection.

The transverse abdominals are located within the anterior and lateral abdominal wall of the lower midsection and the muscles act similar to how a weightlifting belt does to compress the core muscles, plus to stabilize the pelvis and lower back for functional movements.

But strong transverse abdominals are needed in order for the rectus abdominis and internal obliques to function optimally as well to maximize the effectiveness of the vacuum.

So, the benefits of doing the vacuum go beyond just reducing the waist but it’s extremely effective for preventing hernias which occur when the deep core muscles are weak and the upper core muscles have to compensate. (1, 2)

And appearance-wise, weak transverse abdominals and internal obliques can result in a protruding lower stomach (and who would want that)?

Now, what separates this exercise from others?…

Well, you can do endless crunches and many of the basic core movements. But few challenge the deep core muscles to remain in a contracted state for a prolonged period of time to the same extent.

And you can literally perform this exercise anywhere as there’s really no equipment needed. So, the vacuum is hard to beat for what it offers. Not too mention, there are several great variations which means anyone with any level of training experience can do it.

Progression Into The Standing Vacuum Pose

Not everyone may be able to perform the vacuum pose the way it’s supposed to be done at first (at least not most effectively). So, fortunately, there are some progressions that you can implement which will allow you to become a master at the vacuum. Or, you can use any “progression” in place of the standing vacuum.

You can also choose one progression before hopping into the standing vacuum so no need to cycle through all of the progressions.

And there’s no specific order if you choose to do all progressions but the lying version is the easiest.

Start with this variation first which will allow you to effectively isometrically work the core before you progress into a standing version. The reason being… you’re working with gravity.

This variation makes it a little easier for a lot of people to perform the stomach vacuum, and even deeper than the standing version.

Alright, so you’ll get on your hands and knees for this one and then you’ll suck in as usual. But that doesn’t mean you can get reckless and round your back like a cat. You still want to maintain a neutral spine.

The difference with this one is that you’re sucking in against gravity which may tend to up the difficulty. 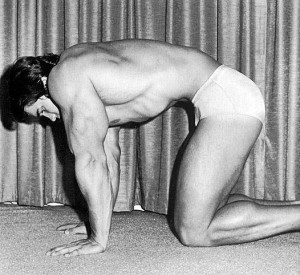 The standing vacuum is the end goal really, and if you have decent core strength then you can jump right into it. But you definitely want to keep your entire core tight to really reap the benefits.

Increase the time for each exercise the better you get at doing each variation. If you have to do less than the 30 seconds then, by all means, do what you can.

How Many Sets To Do?

A good place to start is 3-4 sets of 30-60 seconds and even longer the more advanced you become. And you can even do the vacuum throughout the day, every day. But, for most people, it’s more realistic to do just incorporate it into your training regime.

Don’t overcomplicate it! This is a great exercise along with your regular core training routine.

How Quickly Will I See Results?

As you probably know, nothing comes quickly when it comes to changing your body. But many have reported reduced waist size and a better-looking core within two to three weeks.

However, we have to remember that everyone is different, so your experience may be different than someone else’s. Stay consistent, be patient, and the results will come.

There’s no debating whether or not the vacuum is effective for tightening up your core so that you may look more aesthetic. But we can’t deny the functional benefits as well.

Practicing this gem of a movement is great for strengthening the deep core muscles which is absolutely essential for maximizing the function and look of your midsection.

How To Do Seated Leg Raises – Tips, Benefits, Variations and Muscles Worked

Some exercises are iffy as to whether they're effective or not, but seated leg raises will have your abs burning...

Although no one has ever counted, there are probably more exercises for the abs than any other muscle group. There...

Let’s get one thing straight from the outset of this article – there is no such thing as a waist...