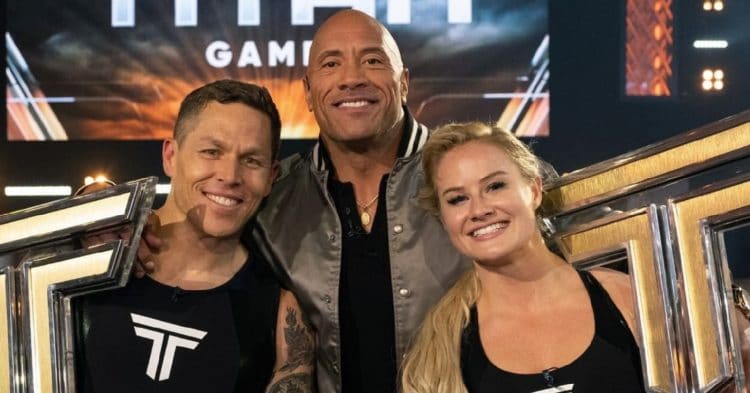 CrossFit got some serious representation on the most recent season of NBC’s Titan Games. In the end two of the sport’s stars, Dani Speegle and Matt Chan would win the entire show, earning $100,000 each in the process.

For the uninitiated, the Titan Games is a show from the brain of Hollywood superstar and fitness enthusiast Dwayne “The Rock” Johnson. It pits athletes from assorted backgrounds against each other, through various intense physical challenges. This season saw athletes from various regions of the United States compete, with the winners of each region facing off to determine who the best male and female athletes are.

The season finale, which aired on Monday, saw CrossFit Games athletes Dani Speegle and Margaux Alvarez, as well as fitness model Courtney Roselle make it to the finals on the women’s side. The men’s side featured 2012 Games runner-up Matt Chan, Air Force Captain Noah Palicia, and school teacher Will Sutton make it to the finals. Each group of athletes faced off in a series of events, before the final two in each gender went head-to-head on Mount Olympus to decide who would be crowned a Titan Champion.

The first event to determine one of the finalists was the Hammer Down, an event that sees athletes use a sledgehammer to knock pins out of standing poles, in order to knock them down. On the men’s side, Chan had competed previously in the event, and was able to use his experience to his advantage. He was able to rather easily best his foes, moving onto Mount Olympus.

As for the women, things were much closer. Dani Speegle was the first to knock down her poles, but she had Margaux Alvarez hot on her tail. Nevertheless, Dani was able to get the win, pulling her victory chain seconds before Alvarez.

The women were up first this time, with Alvarez having a bit of a slip up, giving Roselle the edge, but Margaux would bounce back, taking the lead. Although Courtney tried her best, she would eventually gas out, giving Margaux Alvarez the win and advancing to face Dani Speegle on Mount Olympus. As for the men, a misstep on the side of Noah Palicia saw Will Sutton dominate, earning a record-setting 19 second win.

With just two athletes remaining on each side, both men and both women took to the legendary Mount Olympus to determine who would leave the winner. This course sees a variety of different challenges, testing virtually every aspect of athletic ability. Not only that, but additional barriers were put in place for the finale, making it even more difficult to get through.

First up were Dani Speegle and Margaux Alvarez. Dani would take the early lead, only extending it as the event went on. Alvarez seemed clearly fatigued from her previous challenge, and struggled with some of the obstacles put in front of her. At the end of it, Speegle had a clear lead, completely dominating en route to winning the competition.

When it came down to Will Sutton and Matt Chan, things were a little more back and forth. Sutton took an early lead, but Chan was able to bounce back by blowing through the barriers that gave Margaux Alvarez problems. He was able to keep this lead the rest of the way, earning a clear win, and becoming the Titan Champion, despite being the oldest competitor on the show.

Congratulations to Dani Speegle and Matt Chan for winning the Titan Games, and earning that sweet trophy and $100,000 prize. With three of the four finalist being CrossFit athletes, all of whom beat the likes of UFC champions and Olympians to get there, it speaks volumes for the skills that CrossFit teaches. They are great ambassadors for the sport.

Do Titan Games contestants get paid?