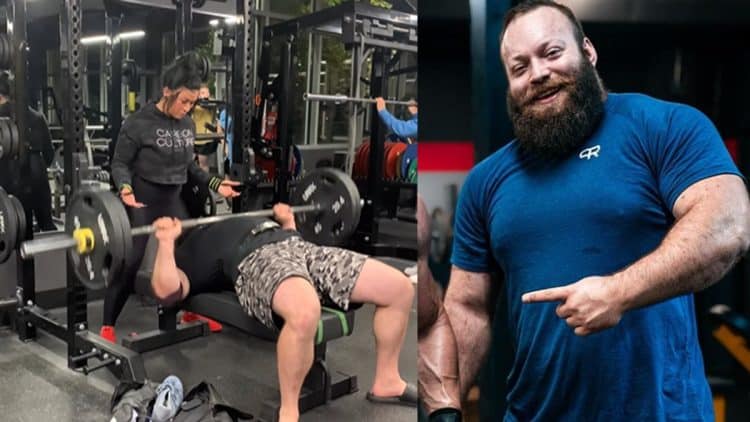 The incredibly strong Daniel Ryjov has gained a lot of traction on social media due to his mind-boggling feats of strength. His upper body power and force seem unmatched by anyone near his bodyweight. So, seeing that his goal is to bench press 700 pounds (317.5 kilograms), he might become the lightest person to accomplish it. According to his Instagram, Daniel’s bodyweight ranges anywhere from 242 pounds (110 kilograms) to 275 pounds (125 kilograms), although his current weight isn’t clear.

Although he regularly shares some video footage of his training sessions to Instagram, Daniel Ryjov’s recent high-rep bench press session blew everyone’s mind. He loaded 225 pounds (102 kilograms) on the bar and decided to perform an AMRAP (As Many Reps As Possible). Daniel’s final result came out to 100 repetitions of a 225-pound (102-kilogram) bench press. Although it is unofficial, there does not seem to be any proof of anyone matching this feat of strength beforehand, making Daniel Ryjov the first one to do so.

In the video, Daniel Ryjov appears to be wearing elbow sleeves/wraps as well as a lifting belt. Additionally, he did all of his repetitions consecutively and unbroken, meaning that he didn’t even take a second between each.

Daniel Ryjov’s lifts had been improving since the beginning of 2022, but a triceps tear put a halt to all progress. This injury happened to him while he was doing 150-pound dumbbell skull crushers. Ryjov, however, has obviously recovered completely, since he is already back to his record-breaking ways.

For comparison’s sake, the world-class athletes in the NFL combine have never managed to complete over 51 repetitions, despite the 225-pound AMRAP being one of their most important tests.

While there are some people who might discredit Daniel Ryov for using elbow sleeves/wraps, it is important to take into consideration that the 4x World’s Strongest Man, Brian Shaw, only managed to do 44 reps and he also used elbow sleeves.

Judging by the two comparisons from above, it is clear that Daniel Ryjov’s strength is unfathomable. To understand it, even more, just a few days before this unbelievable 225×100 set, Daniel Ryjov scored a 660-pound (300-kilogram) bench press PR. Only a handful of people have accomplished this, with the majority of them being a lot larger than Daniel.

This has been arguably the greatest thing Daniel Ryjov has accomplished so far. With this goal out of the way, he can now focus more on his one-rep max, which should ultimately reach 700 pounds (317.5 kilograms). It is not yet known when he will attempt this feat, but if and when he does, there is no doubt he will succeed in his endeavors.