Daniel Ryjov wanted to perform 100 reps, but miscounted and stopped at 90. 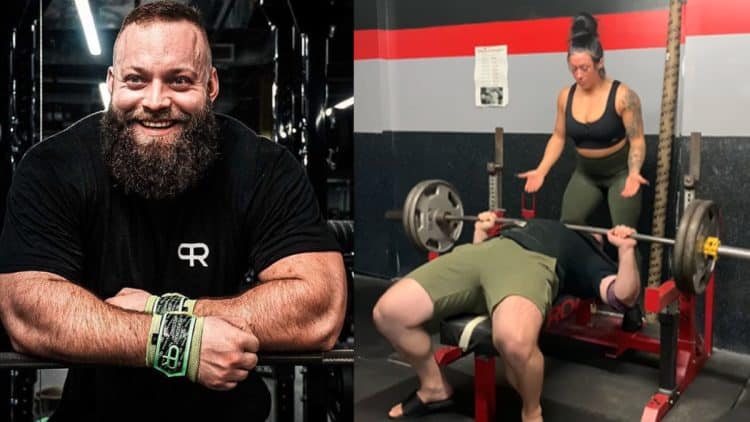 Daniel Ryjov is one of the greatest fitness stars, having earned his fame through completion of some incredible feats of strength. While he is an elite athlete overall, Daniel’s most renowned prowess is his pressing power. This includes massive bench presses, shoulder presses, and some forms of triceps exercises. However, Daniel is not limited to only performing top singles, as his conditioning is also incredible. The best proof of that was Daniel Ryjov’s recent 225-pound (102-kilogram) bench press set, when he performed 90 repetitions.

Daniel Ryjov did use elbow wraps to perform the incredible feat of strength and also had a soft lockout. However, the purpose of both of these was only to avoid an elbow injury, which could have easily occurred due to heavy weights and volume.

Daniel has previously proven that he can also complete incredible numbers of reps with the full lockout, as he bench pressed 225 pounds (102 kilograms) for 50 paused repetitions.

It is also important to note that Daniel Ryjov is still recovering from an injury, having tore his triceps just four months ago. So, with a bit more time to recover, Daniel will definitely perform even better.

According to Daniel Ryjov’s caption, he wanted to do 100 repetitions, but miscounted and stopped at 90. Judging by his final few reps, it seems that he was definitely able to reach that mark.

The 225-pound (102-kilogram) bench press AMRAP (As Many Reps As Possible) has been one of the greatest tests of strength for a number of years now. It is even used in an NFL Combine to help recruiters figure out who the greatest prospect is. Well, Daniel Ryjov wanted to test himself and successfully completed 90 reps. For reference, Justin Ernest unofficially holds the NFL Combine record, having completed 51 reps in 1999.

Daniel Ryjov states in the caption of his post that his 90 rep bench press set is a new World Record, but it is difficult to confirm that officially. However, it is definitely very impressive since we know that the 4x World’s Strongest Man, Brian Shaw, only managed 44 reps with 225 pounds (102 kilograms).

Daniel Ryjov was chasing a 700-pound (317.5-kilogram) bench press prior to his tricep tear, so that will probably be his goal once again. He was not far from bench pressing 700 pounds (317.5 kilograms), as he just missed locking out 675 pounds (306.2 kilograms) shortly before getting injured.

Daniel Ryjov has also taken part in one sanctioned powerlifting meet, which was the 2017 USPA SMG’s March Mayhem. He competed in the 110-kilogram weight class and came out victorious. Daniel’s lifts from that competition came out to:

Daniel Ryjov seems very similar to Larry Wheels, as both men possess some other-worldly strength. So, it will be interesting to follow his journey as he is recovering from a tricep injury. Daniel could unofficially become the first person to bench press 225 pounds (102 kilograms) for 100 repetitions, and maybe even the lightest person to bench 700 pounds (317.5 kilograms).