Bodybuilding veteran Dennis Wolf was recently seen in the hospital, getting surgery done on his shoulder and bicep 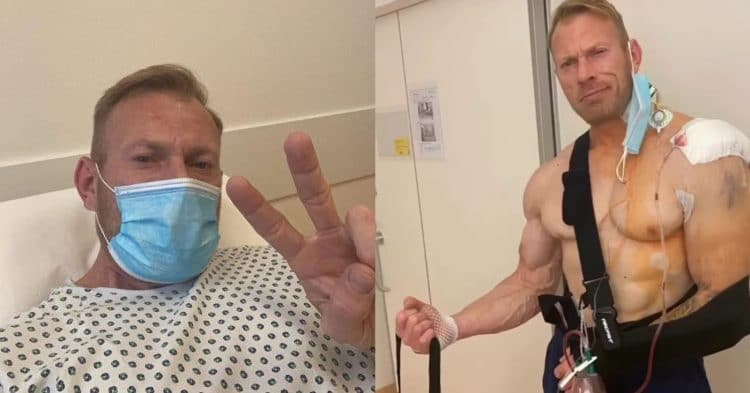 Without a doubt, Dennis Wolf is among the most respected bodybuilding veterans in the world. That is why it was a bit concerning to hear that he was in the hospital, but now we know a bit about what is going on.

With about two decades worth of bodybuilding experience under his belt, Wolf was one of the mainstays of the sport during the early 2000s and early 2010s. While he never got higher than 3rd at the Olympia, he is an Arnold Classic winner and undoubtedly an elite athlete.

On top of his skills on stage, Dennis is also beloved off stage, even well into his retirement. There was even a bit of fanfare when the German bodybuilder finally earned his status as a United States citizen, just due to how highly regarded he is in the community.

That is why, when word got out that Dennis Wolf was in the hospital, fans were understandably concerned. However some updates to his Instagram revealed that he was there for surgery, but not for anything too serious.

Some posts to his Instagram Story saw the bodybuilding legend shortly after he got surgery on his shoulder and bicep. At this point, he had not spoken to the doctor to know the full extent of what was gong on, but he seemed to be doing well after the procedure.

“I will give you some more updates when I see the doctor later today, because I have no idea what exactly was done or how needed to be repaired,” Wolf said.

Before he left the hospital, Dennis was able to sit down and speak with the doctor about what was going on. He uploaded the conversation to Instagram, but it is all in German.

That being said, he explained in the caption that he had to repair tendons in his shoulder and bicep. His recovery time is about 12 weeks, with 4 of those weeks being with his arm in the sling.

“A huge thank you to Dr. Mathias Ritsch for the great job! Now you have to wear a sling for 4 weeks and take care of your biceps for 8 weeks.
I feel great and am looking forward to my recovery time.
Of course with some physiotherapy in Olfen, North Rhine-Westphalia next week💪”

All things considered, it seems like this was a fairly minor procedure for Dennis Wolf. It is good to see that he is doing well, and will be back to his normal self in just a few weeks.