Kirill Tereshin, the Russian known for injecting his arms with copious amounts of synthol, was seen in the hospital getting his arms drained 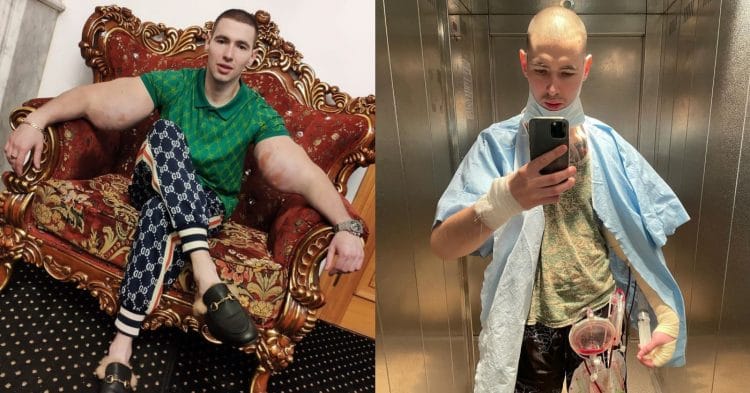 Like watching a car accident, it is hard to look away from the synthol addicted Russian bodybuilder Kirill Tereshin. He recently found himself in the hospital, in need of getting his arms drained.

Over the years, Tereshin has gone by many nicknames. He has been called everything from the “Russian Popeye,” to the most commonly known “Synthol Kid.”

The reason for this, is Kirill’s apparent addiction to using synthol injections in his arms. Synthol, of course, being an oil-based substance used to give the appearance of having muscles that one does not have.

Over the years, Kirill Tereshin has experienced a ton of side effects from his abuse of synthol. He has repeatedly been seen in the hospital, whether it is from getting sick because of the injections, or because he needs to get his arms drained.

Most recently, the Russian found himself in the hospital yet again, and shared the news through a post to his Instagram. Now, it is not exactly clear what sent him to the doctor, but what can be seen is the fact that he is getting his arms drained of fluid, which heavily suggests that this is a result of his many synthol injections.

As previously stated, there is no indication as to what it is that brought Tereshin to the hospital. However it seems like a certainty that he is dealing with more side effects from this need to bring attention to himself.

Judging by an update that he shared a few hours later, it seems like the issue is mainly just having an effect on one arm. Again, he does not explain what exactly is going on, but he is seen with one of his arms completely wrapped up, while the other still looks full of synthol.

At this point, it is hard to do anything but feel bad for Kirill Tereshin. It seems clear that he is dealing with some sort of psychological ailment that makes him believe it is a good idea to keep using synthol, in spite of the serious health effects it continues to have.

It goes without saying that the best way to look how you want to look, is by making a dedicated effort to eat and train properly to achieve your goals, rather than take shortcuts. Hopefully whatever is going on with him is not too serious, and one day he will learn his lesson.