The Bronze Bomber makes it clear he isn't a gym dude 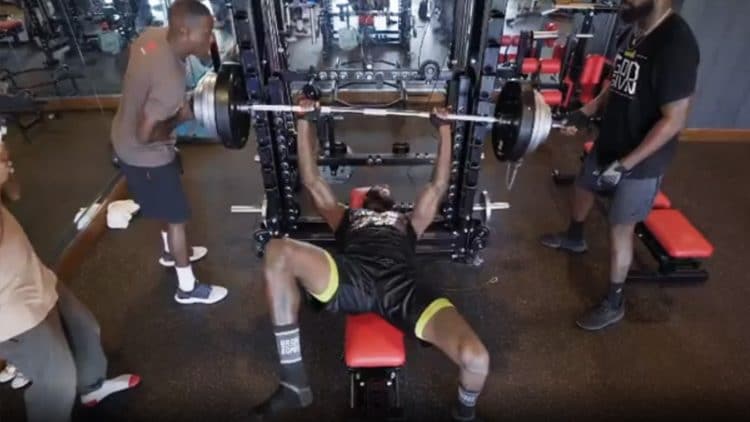 For those of you that don’t know, Deontay Wilder AKA “The Bronze Bomber” is a former WBC boxing champion known for his insane one-punch knockout power. He is currently training for the 3rd fight against the “Gypsy King” Tyson Fury.

However, the reason we are talking about Deontay Wilder today is because of a video he posted on his social media to show his strength. Unfortunately for him, it didn’t go as planned.  The goal was pretty much self-explanatory- posting a video bench pressing some decent weight will make you look impressive, (perhaps even) intimidating, badass and all the fellas will be admiring the gainz.  Why that isn’t the case-well take a look for yourself

As you can see, if this was posted by anyone with less intimidation factor and more….human-looking, this would have been laughed off Instagram and everyone in the gym would have been giving you the side-eye. it has everything a standard “gym fail” video has. Gym bros hyping you up, horrible form, ass leaving the bench, bar path all over the place, and the biggest sin of them all-gym gloves.

But, this is Deontay Wilder, and he can punch you so hard he will erase the first 5 years of grade school from your brain. Also, he has confronted internet trolls in the past and it went as you expect such a car wreck would go.

So, with all that taken into consideration, Instagram folks mostly praised his strength because he was bench pressing 310lbs, which is a very respectable number and no one dares talk trash to Deontay, because he will hunt you down, punch your face and it’s gonna suck.

That is unless you are 28-2, Interim WBC champion, Dillian Whyte. He saw that video and probably said to himself;  “challenge accepted, One-punch man”.

@bronzebomber screaming with the light weights 😂 coward i rep your max. Anytime, anywhere we must fight. Let’s gooooo

As you can see in the caption Dillian means business, he’s casually repping Deontay’s one rep max with dumbbells!  For me, this just proves something you can kinda already tell by Deontay’s built. He’s a monster when it comes to boxing but lifting weights is definitely not his thing. Which is cool, he doesn’t have to be.  He isn’t a Mr. Olympia competitor or a  bench press-only powerlifting specialist. He’s a big scary dude that can punch really really hard.

Tony Ferguson was once on a 10 fight win streak in MMA, and yet he is notorious for having some of the weirdest, strangest workouts known to mankind. Did that make him any less of an MMA fighter? Of course not, he’s just a weird dude that does stuff differently. Very, very…differently.

The same should be applied to the Bronze Bomber, just because he can’t bench 3 plates for reps with good form doesn’t diminish his skillset or career achievements.  Besides, he has his hands full with Tyson Fury in less than 3 weeks. Looking good on Instagram should while bench pressing should be the least of his worries right now.