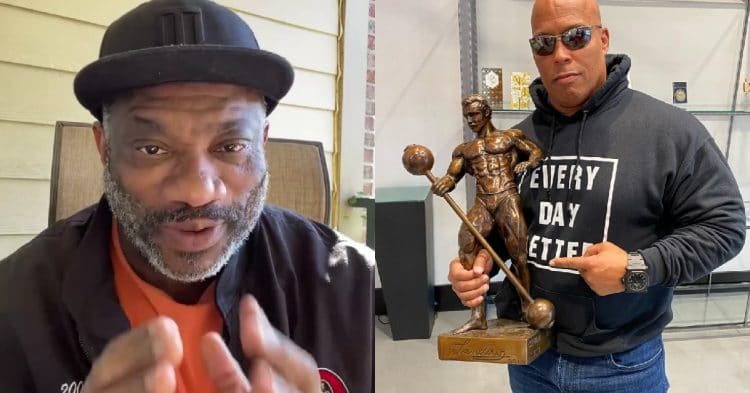 Dexter Jackson has been going back and forth with Shawn Ray for a while now. Recently though, he decided to put the nail in the coffin of this beef.

Jackson heard some comments Ray recently made about him, as well as all of the current generation of bodybuilders. Although Shawn tried to clarify that it was nothing personal against Dexter, the 2008 Mr. Olympia winner fired back. This prompted a response from Shawn, and the beef began to get more and more intense.

Now Dexter Jackson is looking to end this beef once and for all. He took to Instagram with a lengthy video, in an attempt to shut the door on his back and forth with Shawn Ray.

“This is my very last time doing a video about Shawn Ray, or going back and forth with Shawn Ray on the internet, or anything like that. It’s my last video. You know I’ve got another one in the hole, but I’m not going to give Shawn the satisfaction of me posting on my page some s–t about him. That’s what he does, that’s what he wants. He likes controversy, because it keeps him relevant. He’s an old has-been, that can’t let s–t go. He’s very jealous. He’s a very jealous guy because he couldn’t do what I’ve done. That’s what this is all about.”


Jackson goes on to explain that Ray is the one starting things. He was quite bothered by the comments Shawn made about beating him in his prime. Moreover, he says that when he was preparing to talk about Shawn with Patrick Bet-David, Patrick told him that Ray regretted making the comments he did about Dexter.

Following this, Dexter then turned his attention to comments Shawn apparently made on the YouTube video of Jackson speaking with Valuetainment. Therefore, Dex decided to post comparison pictures, to see what fans thought. It would appear that the vast majority of fans felt that Dexter had a better physique than Shawn.

Jackson went on to refute the things Ray said about him in a recent post. Here, he dissected his physique comparing it to Dexter’s. However, the Blade felt that these comparisons were neither fair nor accurate. Not only that, but Shawn then denied posting the picture himself, saying it was a repost.

Dexter Jackson concludes by reminding everyone that Shawn Ray never won the Olympia, reiterating that he feels Shawn’s career was unremarkable. You can watch the full 26-minute video below, but it is clear that these two men will never be friends.

How To Stretch Quads The Correct Way – Hint: You’re Probably Not Doing This