Video: Check Out Dexter Jackson Posing At Tampa Pro, 6 Weeks Out From Olympia 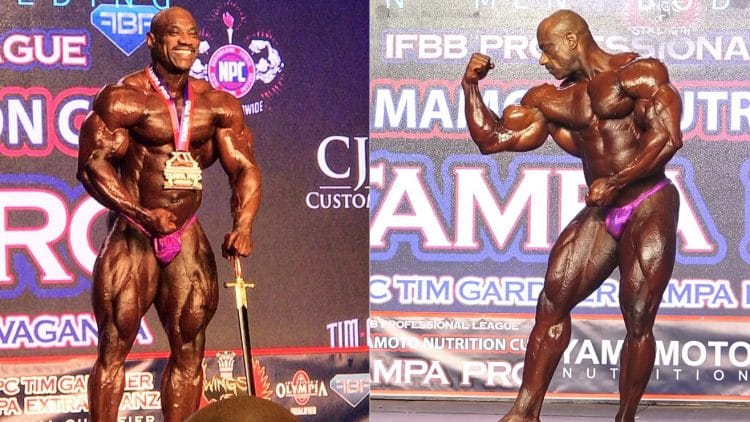 Dexter Jackson may not have won a Mr. Olympia competition since 2008, but he is coming back with a vengeance. Check out his stage posing at the 2019 Tampa Pro, ahead of this year’s competition.

Jackson is one of the greatest bodybuilders off all time. He holds more bodybuilding wins than anybody else, including a record 5 wins the Arnold Classic. This skill has continued most recently, at the 2019 IFBB Tampa Pro.

Jackson won the show, with a well-rounded performance. Additionally, his skills posing on stage took things to the next level.

This was a good step ahead of his showing at the 2019 Mr. Olympia. He came to the Tampa Pro very prepared though, as you can see by this video of his poses.

This is a strong showing from Jackson.

He is clearly using his experience to win over the crowd. It was definitely enough to earn first place at the Men’s Open Bodybuilding of the Tampa Pro, as he was head and shoulders above the rest of the competition. He managed to outperform other amazing athletes like Lukas Osladil and Hassan Mostafa.

However, this year’s Mr. Olympia competition is primed to be one of the toughest yet. There is going to be a new champion crowned, with Shawn Rhoden’s removal from the competition. Nevertheless, many bodybuilders are looking to step their games up this year, just like Jackson.

Competitors like Roelly Winklaar, William Bonac, and Brandon Curray. All the competitors heading into this year’s competition are bringing their all.

That being said, if Dexter Jackson wishes to be competitive this year, he will really need to bring a flawless performance. He will need to round out all the edges of his game, bringing everything together. Additionally, he will need to look at tightening up a few areas of his physique. It appears like Jackson’s midsection could use some work.

So just over 6 weeks out from this 2019 Mr. Olympia, Dexter Jackson is looking ready to go. This year’s Olympia starts place September 12th. We will have to see if this will be enough time for him to put all the pieces together.