See who we think will place in the top 6 this year! 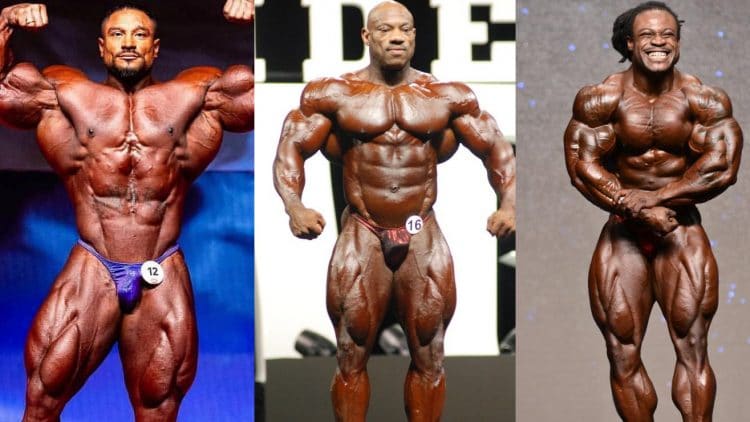 The 2019 Mr. Olympia competition is approaching quickly and with just 7 weeks until the big show; the obvious question is who will be competing and predictions of the top 6 guys.

Well, the 7x Mr. Olympia Phil Heath has not confirmed he will be competing this year after falling to the new Mr. Olympia Shawn Rhoden. But after Rhoden’s legal issues, he was dropped by AMI and cannot defend his title as far as what we know at the moment. And Big Ramy hasn’t competed this year either.

Anyway, that leaves us with a few top guys that will likely place in the top 5 and it’s no secret either. You got Brandon Curry, Roelly Winklaar, William Bonac, and Dexter Jackson. All are at the top of their game right now, and it could be anyones for the taking.

But here are our predictions for the order of how we think these competitors will place, with our vote for the 6th place contender as well…

Curry has been so impressive as of late, placing 5th in last year’s Mr. Olympia; which was his best-ever finish at the show. And he surprised the bodybuilding world by winning the 2019 Arnold Classic in May of this year which was well deserved. Curry is a mass monster but he has top-tier muscle shape and based on what he’s currently looking like, it’s hard to not put him above the others. If he comes in perfectly conditioned, the Sandow is his!

When it comes to pure genetics, few can stand toe to toe with Roelly Winklaar’s round and full muscle bellies. But, it’s not enough to be elite in this department as Winklaar has struggled to consistently come in conditioned enough to really make a statement, except for at last year’s Olympia where he placed (3rd) right behind Phil Heath.

Winklaar was the favorite to win this year’s Arnold Classic but he disappointed with a 5th place finish. But, it doesn’t mean much especially since he’s had a lot of time to bounce back and he’s looking monstrous currently.

Bonac in third is very possible if he can bring a slightly better version of himself than last year’s. He placed fourth at the 2018 Mr. Olympia competition and won the 2019 Arnold Classic Australia. Bonac has freaky proportions and his conditioning will determine how he places in September. And hopefully, his recent fallout with coach Neil Hill doesn’t have a negative effect on his showing.

Dexter Jackson came in 7th at the 2018 Mr. Olympia competition, which is his lowest placing since 2001. And that’s how incredible he’s been, even boasting the accolade of the winningest bodybuilder in IFBB history. Well, at 49 years old, the 2008 Mr. Olympia champion is running out of time and he must come in much better than he did last year.

Dexter Jackson likely won’t win the title but we think this incredible champion will make some big changes and place in the top 5 once again.

Sandoe is a beast and he’s steadily climbing the IFBB ladder, but he’d have to put him at the bottom of the top 5 list, although he could swap with Dexter Jackson. He’s very full with large muscle bellies and impressive conditioning but after placing third at this year’s Arnold Classic behind William Bonac, it’s only fair we put him at 5th.

If you follow bodybuilding then it should be no surprise to you that we have Nathan De Asha in the 6th spot. Ever since he earned his Pro card in 2024, De Asha has been a big name in the IFBB Pro circuit and he came in 8th place at the 2018 Mr. Olympia contest. But we could easily see him moving up two spots into 6th if he’s well-conditioned. De Asha won the 2019 British Grand Prix and placed second at the Vancouver Pro, so he’s doing pretty well as of recently.

Of course, anything could happen and these placings are how we could see it going down right now. The 2019 Mr. Olympia is going to be an exciting one and we definitely can’t wait to see what each of these elite bodybuilders will bring to the stage.

What are your predictions for the 2019 Mr. Olympia?