Weightlifter and CrossFit rookie Dmitry Klokov goes to work on the CrossFit Ope. 21.4 workout, putting up some serious numbers 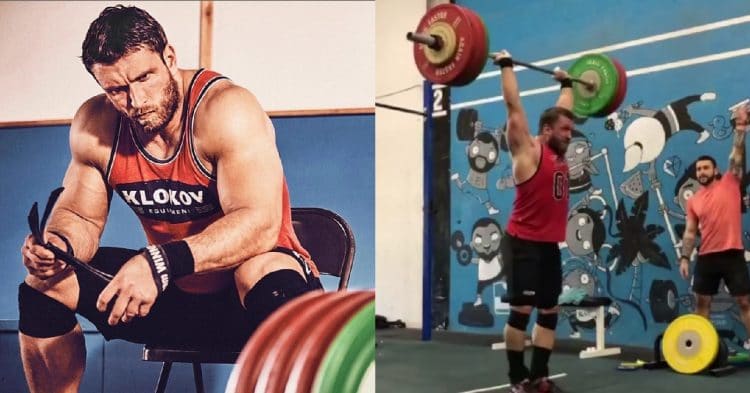 Russia’s own Dmitry Klokov has been having some fun with this year’s CrossFit Open. His final performance of the Open season saw him putting up some pretty impressive numbers for the 21.4, which will surely land him in the quarterfinals.

As a weightlifter, Klokov has accomplished a lot on the platform. Competing in the 105kg division, he has competed in and won numerous world championships, and even made it to the Olympic Games, where he landed in the silver medal position in 2008.

However recent times have seen this weightlifter turn his attention to a new sport. Ahead of the 2021 CrossFit Open season, he revealed that he planned on participating this year, testing his athleticism in a relatively new field.

So far, Dmitry Klokov has had a mixed bag of results, not doing terrible but being far from the best in the world. Evidence has proven that he has had a bit of trouble keeping up with the cardio-heavy nature of the workouts seen in the Open.

However this turned around a bit with the 21.3 and 21.4. The workouts, which were announced last week, take place one after another without a break in between, and to the surprise of many, the Russian had an epic showing.

These are the workouts that Klokov completed for the CrossFit Open 21.3 and 21.4:

Posting to Instagram, Dmitry Klokov shared his results of the 21.4, and they were quite impressive to see. After suffering through the heart pounding cardio action of the 21.3, he went into the barbell complex, which saw him put up an impressive 330lb (150kg).

This was far from easy, as Dmitry himself noted. That said, to put his performance into perspective, he did this complex with a heavier weight than all three Panchik brothers at the Open announcement, besting Scott’s winning score by nearly 20lb!

“The most difficult 150 kg in all my 25 years of professional sports career 🤷🏻‍♂️” Klokov noted.

Dmitry is registered in the Asian continental region, where the top ten percent equates to 812 men who will move on to the quarterfinals. Things have been a little touch-and-go for the majority of the Open, but with this solid showing he should be able to land move on to the next stage and further attempt to qualify for the 2021 CrossFit Games.

Time will tell how this all ends for Dmitry Klokov, but so far he has shown that even at 38 years old he carries a ton of strength. The cardio side of things leaves some more to be desired, but no matter what happens, it has been interesting to watch him perform.