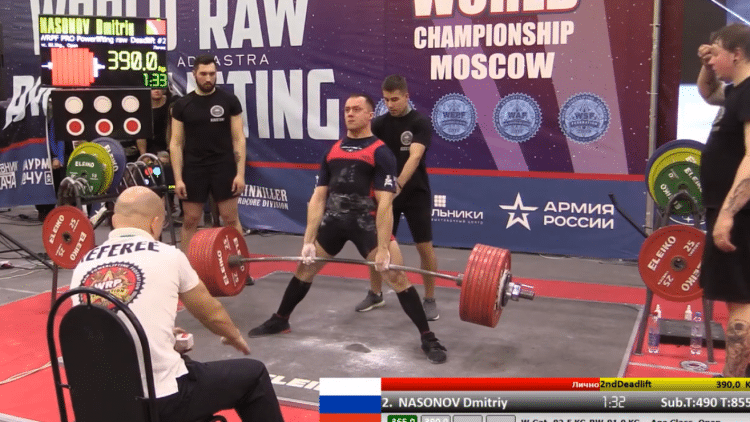 Dmitry Nasonov is an incredibly strong powerlifter. He reminded us of that again, when he managed to hit a huge deadlift of 860lb.

Nasonov has been one of the world’s top powerlifters for a long time. He has been competing since 2013 and has broken records at almost every step of the way. A multiple-time winner of the Russian World Championships, he is one of the best strength athletes in the country.

This trend of greatness continued recently, at the World Raw Powerlifting Championship World Championship Finals. It was here, in Moscow, Russia, that Nasonov was looking to beat his own record deadlift, in the -83kg division. Although he was ultimately unable to do that, what he did do was impressive all the same.

On his second attempt, Dmitry Nasonov hit a mind-boggling 390kg/860lb deadlift. What is so crazy about this lift, you may ask. Well considering he was only weighing in around – 83kg, this is nearly five times his bodyweight! That is a massive performance.

Now this lift from Nasonov was just his second attempt. He followed this up with an unsuccessful third and fourth try to hit 420kg (926lb), for a new record. If he had hit it on the fourth try, it would not have counted for his competition total. However, it still would have broken his own previous deadlift world record of 400kg (882lb), which he set in 2017.

On top of that, as he showed later, this lift even bloodied Nasonov’s hands. (GRAPHIC WARNING)

Despite the fact that this was not his most impressive lift, Nasonov still looked incredible. To be able to lift that much more than your own bodyweight is certainly no easy task. Moreover, when you consider how easy he made it look, and the fact that he can do better, it is simply unfathomable. Nevertheless, he did it, and we are all just left to pick up our jaws from the floor.

What did you think of this recent deadlift by Dmitry Nasonov?