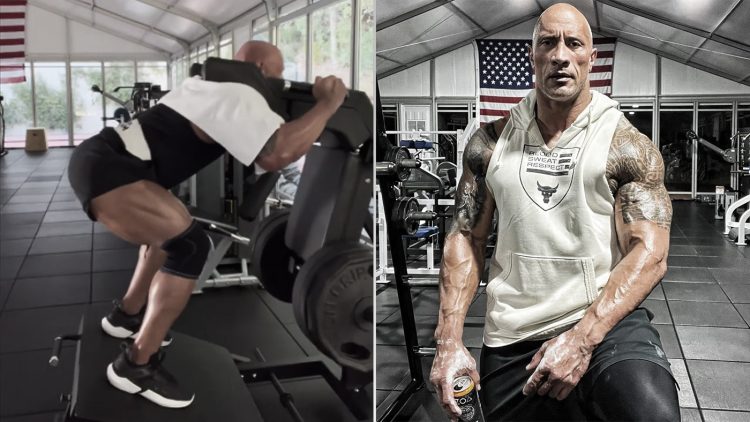 When you have the confidence to show off quads in extremely high shorts and then it goes on to become a trend, there is no reason to doubt that you take the leg day workout extremely seriously. Yes, we are talking about ‘The Rock’ Dwayne Johnson. The 49-year-old recently shared a leg day workout video on his Instagram account to show how he puts his quads and glutes through extra work.

The Instagram video shows Dwayne Johnson performing a reloaded power squat on a hack squat machine. Johnson explained in the caption that he performs 4 sets of 25 reps of this finisher at the end of his leg day workout.

‘Badass song to train legs too. Smashed leg training this morning and finished with this reloaded power squat 4×25. Give it a shot next leg day. raise the foot platform to target certain areas of the quads and glutes. These final 100 reps at the end of your leg training are brutal but extremely productive. Put yourself thru hell when you train, but especially on leg day. Legs separate the men from the boys. Don’t skip it.’ Dwayne Johnson wrote in the caption.

Dwayne Johnson uses the hack squat machine differently to perform his finisher sets. A hack squat machine is similar to the reverse leg press machine. However, the difference is that the person performing squats on the hack squat machine has his/her feet planted on a stationary platform facing away from the machine. Shoulders are placed under the machine’s shoulder pads that carry the weights (similar to lifting weights in a traditional barbell squat). However, the machine provides balance and stability to train specific muscles and reduces the chances of injuries significantly as compared to traditional barbell squats.

However, many believe that the hack squat machine does not work hamstrings and glutes very well. Johnson performs his reloaded power squat on the machine while facing towards the machine instead of facing away from it. He also raises the platform slightly so that the toes are below the ankle level. Therefore, the reversed position makes hamstrings and glutes work more than other muscles in the lower body. Johnson advises raising the platform slightly, presumably for the people with tight ankles as this puts toes below the heel level.

Are you going to try this to finisher on your next leg day? Let us know in the comments!

The Fierce 5 Workout Program to Build Muscle and Strength