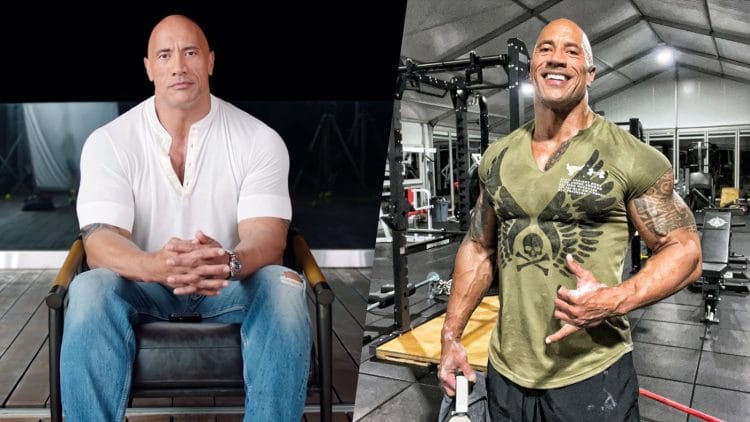 Hard work, discipline, and self-acceptance are the traits that elude most of us. Dwayne ‘The Rock’ Johnson is one person that has harnessed all of these. In a recent video interview with Vanity Fair, The Rock spoke about different aspects of life and also revealed that he was told to lose weight and slim down to be successful in acting.

Dressed in the timeless blue jeans and white t-shirt, Dwayne Johnson answered increasingly difficult and personal questions in a minimalist studio setting. As the video opened, the interviewer asked simple questions like ‘what are you obsessed with?’ and ‘where do you feel at peace?’ The Rock answered the questions with relative ease.

Johnson is not a stranger to hard times. After advising those reckoning with a difficult past, a hint of pain swept his face moments when the interviewer asked: ‘When in your life did you feel most abandoned?’ Not willing to give voice to the painful memories and bring up names, the Rock steered away from the topic respectfully.

“That’s a real tough one to answer about abandonment. I think that’s between me and a few of the other loved ones.” Dwayne Johnson said.

Dwayne Johnson carries a huge responsibility on his shoulders as one of the highest-paid actors, fitness role models, and brand ambassadors of our time. An important aspect of being in that position is managing pressure and handling high-stress situations. So when the interviewer asked ‘What’s the most important thing to remember when you’re dealing with extreme pressure?’ Johnson shed light on how he handles situations to influence those around him in the most positive way possible:

“The most important thing to remember when you’re dealing with extreme pressure, for me, is to stay calm. It’s in calmness amidst the calamity that you’re going through that you try to gain your clarity, and gain your focus ‘coz it helps you make that decision. And I also found that I’m in a position these days, where, in a highly stressful situation, there are a lot of people who look to me.

My reactions to something, that will, in turn, inform how they respond, and how they react to the stress or the difficult scenario. So I try to keep those things in mind, try to remain calm, and make the best decision possible.” Dwayne Johnson said.

What it means to be a man

Dwayne Johnson once refused an offer to join the Calgary Stampeders’ football team. He knew full well that he will be held accountable for the success or failure of his decision to pursue pro-wrestling. Johnson feels that being a man means being accountable. He went on to elaborate as the soft piano music accentuated the depth of his thoughts.

“I think what it means to be a man is to be accountable, is to be accountable and stand up to the mistakes you’ve made, it’s okay to fuck up, it happens to all of us and be open, rips yourself open, be vulnerable. I’ve all- I’ve been there, we’ve all been there. You know, the benefit of doing something like that, is on the other side of that, usually is some sort of progress, and how important that is. It’s also, in my opinion, a quality of being a man is doing what you say you’re gonna do and taking matters into your own hands sometimes.

But if you look somebody in the eye, you shake their hand, you give them a hug, or you give them your word, it’s important to do it, or do your best to see it through.” Dwayne Johnson explained.

The Rock was told to slim down after transitioning to Hollywood

Dwayne Johnson has received a fair share of rejection during the early stages of his career. The interviewer asked Johnson to recall the occasions when he felt least comfortable in his skin. The Rock quickly recalled the moments when he was green in his pro-wrestling and acting career and stated that he was told to slim down to make a successful career in acting:

“I felt least comfortable in my own skin on two occasions. When I first started as a professional wrestler, I was told back then that you can’t smile enough, You gotta be happy every time you go out there, you have to be so joyous at the opportunity that you have. I wasn’t reacting authentically. I was being a very buttoned-down, saccharine version of who I actually was, at that time, in the world of professional wrestling.”

“The other time that happened to me was when I made the transition to Hollywood. And at that time, a few years into my Hollywood career, approximately the mid-2000s, I was told then that I had to lose weight. I had to change my eating habits, diet, couldn’t go to the gym as much. I really had to slim down. I had to not reference the name of The Rock, I had to do as best I could, not mention or reference the world I came from, that I was proud to come from the world of professional wrestling.

So at that time, when there was no blueprint for somebody like me, half black, half Samoan, I look how I look, I talk how I talk. You can’t be big, you can’t go to the gym, you can’t call yourself The Rock. Let’s not talk about pro-wrestling.”

The Rock went on to say that the resultant confusion then led to clarity of thought. He added that it encouraged him to embrace his true identity.

“Well, you buy into that shit, as I did. Until- one of two things is gonna happen. You’re either gonna continue to go down that road, and that path, and you’re gonna be miserable. And eventually, your career is probably gonna fizzle out. You’re not going to have any sense of longevity or quality to it. Or, the other thing that’s gonna happen, you’re going to say, “Fuck this shit, I’m gonna be me, and we’re gonna see what happens.”

How fame has affected The Rock

The Rock admitted that he is constantly reminded of being a celebrity and it is hard to maintain anonymity for the most part. He then went on to share the things that help him forget stardom once in a while:

“Every once in a while, it’s nice when I can isolate myself, either on my farm, or certain places in the islands where I don’t see anyone, and don’t interact with anybody, except my family. Those are nice times where, you know, you’re not reminded as often. But again, not a problem, not a problem.”