The daily struggles of a near 400lbs man

Eddie Hall is a truly huge individual, he is 6’3” and weighs 350 lbs, the normal world is not suited for a human being of those proportions. Him being alive requires the consumption of at least 4 to 5 thousand calories per day. Even in his post-Strongman career, he’s still maintained most of his mass and it’s still causing him daily struggles.

Being a busy man as he is, Eddie went to a Sports festival in Scotland as a guest. He did some atlas stone lifting,  congratulated the Stoltman brothers on dominating Scotland’s Strongest Man competition, signed some autographs and bent a frying pan.

However, before he could get to the fun part, he had to endure the daily pain of being a modern-day TItan among mere mortals. He goes to sit in a regular airplane seat and literally can’t fit in. He finds a seat that he can fit in, thanks to the plain being a bit empty but another issue arises.

He needs a seatbelt extender because he’s just too big for the regular seatbelt. Then the digestion kicks in from the immeasurable amounts of food he consumes and the real horror begins as he starts explaining the nightmare scenario of him trying to take a dump in an airplane toilet in which he can’t fit in.

He explains how given the dimensions of the airplane toilet, he would literally have to relieve himself with an open door and wipe himself while sticking out the bathroom stall.

Thankfully the viewer is not graced with such unmeasurable horrors. Instead, Eddie gives a reaction version of him trying to take a piss in such a small space, which is equally frustrating for such a large man. 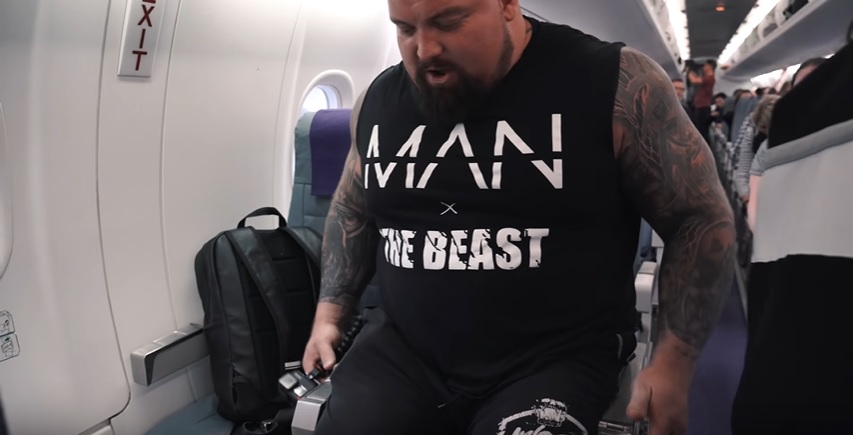 If all that wasn’t enough, while catching a plane ride back home, Eddie literally has to break the armchair rest so he can get extra leg space.

The modern-day world isn’t made for a man of Eddie’s size. Everywhere he goes, he needs to endure the frustrating discomfort of being huge and larger than an average human. Which is a lot, since Eddie does guest appearances, tv shows and everything under the sun to keep himself busy.