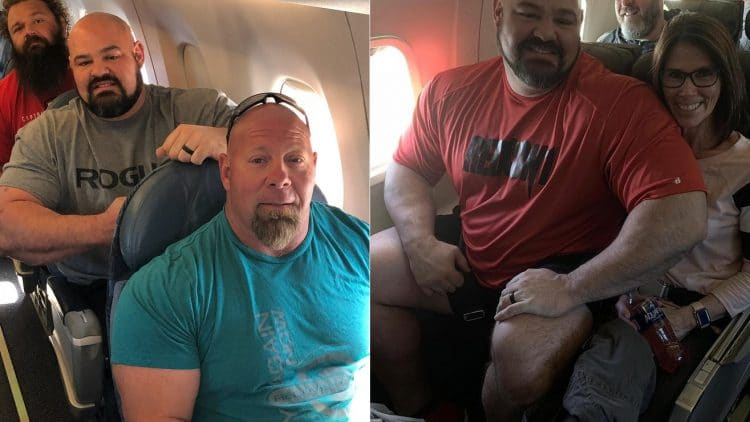 These giants are literally larger than life!

Most Strongmen and powerlifting competitors are extremely massive, so it’s no surprise doing average, daily activities would be a real challenge. Now, these athletes are always competing throughout the year and so travel is required to get them from one place to another.

The only problem with this is often times, a plane ride is necessary to commute. This could pose as a challenge for the big guys since they usually share a row with other passengers.

You’d think a huge airplane would be able to accommodate such a big human being but that’s not the case with these beasts weighing up to and above 400 pounds. Guys like Karill Sarychev and Brian Shaw are well over 6 foot tall and wide as a fridge.

Brian Shaw is the most recent big man to post a picture of him sitting in a small seat (Compared to him) on an airplane. Shaw is 6’8, 418 lbs but it doesn’t stop him from boarding a plane.

“I seem to fit perfectly in this seat. Thankfully this young lady next to me is a good sport…and was in for a fun picture!”

He’s such a friendly giant, that who wouldn’t laugh it off and suck it up for the ride! After all, Brian Shaw is a 4-time World’s Strongest Man champion, so the young lady was probably thrilled to know that she was lucky enough to sit next to him, even if it meant having a little less room!

2. Eddie Hall – Traveling with someone small is a great idea!

The English powerhouse sits next to his son on an airplane so he can have more space. He even uses him as an armrest (He jokingly says of course). At 6’3 and nearly 400 pounds, having a son as a plane buddy is a good idea.

3. Kirill Sarychev – No room to get anything done!

You can’t be the world record holder in the raw bench press (738.5) without being an oversized human being. The Russian powerlifter Kirill Sarychev puts his belly on the drop-down tray during his trip to show just how much room he takes up on an airplane.

He can’t get on his laptop… the struggle is real!

4. Everything is Better in Three’s

Robert Oberst, Nick best and Brian Shaw travel like a bobsled team on an airplane (They would not fit in a bobsled by the way).

“This plane keeps going in circles!!! Seriously though, which is better, picture 1 or 2???,” Robert Oberst made fun of the situation in his Instagram post.

Now, you might just be inclined to appreciate how easy you have it compared to these very massive superhumans! However, being so large is just a small price to pay for being among the most elite athletes in the world.

If you had no idea of how these Strongmen manage to navigate through life, well… hopefully you’re perspective has changed. But being larger than life is not all that bad as you can see!