See How Much These Strongmen Eat In A Day! 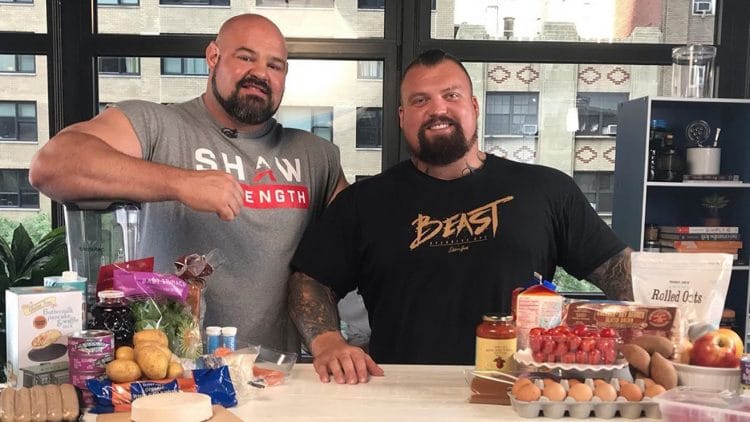 Eddie Hall and Brian Shaw are among the strongest men to ever walk the planet. However, in order to build and maintain that muscle, you need an absurd amount of calories.

Ten thousand calories, to be exact. That is basically what Hall and Shaw consume on a daily basis. How do they do it, you ask? Well, they made a video (check out at below) breaking down both of their ridiculous diets. Here you can see just what the two behemoths have to consume in a day.

Hall is around 6’3 and weighs in around 300-360lbs. Every day, he starts off by drinking a liter of water, “to wash everything out and get the organs going,” before enjoying his first meal. Breakfast One consists of around four eggs, five or six pieces of bacon, four or five pieces of sausage, toast, beans, and tomatoes. Additionally, he washes it all down with a liter of cranberry juice, for the same reason as the water.

Hall will then enjoy Breakfast Two, which is smaller. It is made up only of a bowl of porridge, with some fruit.

Following this second breakfast, it is time for Hall to head to the gym. Here he puts in a good-sized 2.5-hour workout. To supplement his diet during his workout, he enjoys more cranberry juice, along with some beef jerky bites. After the workout, he downs a protein shake with milk, around a liter in size.

Next, it’s lunchtime. Eddie Hall will make 12-16oz of steak, along with 200-300g of pasta, and 200g of veggies. Unbelievably enough, he tops this off with half of an entire cheesecake for dessert.

At around 3 pm, Hall will have his fourth meal, mainly consisting of hamburger patties. Additionally, he will enjoy a couple of pieces of fruit, like an apple and a banana.

After getting his kids from school, he may steal one of their chicken nuggets. However, it is right back to the strict diet, as he gets some more steak. Also, he will eat more pasta and rice, and an apple.

Hall’s final meal is extremely loaded with carbs. He will have around 2lbs of meat, and 2lbs of carbs in this dinner. He polishes that off with the other half of the cheesecake for dessert. Then right before bed, he ends the day with a protein shake and protein bar.

Shaw has a completely different frame from Hall. He stands at 6’8 and weighs in at around 400-440lb. This size stems from his diet which starts with a quick meal of eggs. He will have 6-8 eggs, along with three cups of rice. Then he washes it down with some orange juice and blended spinach.

Shaw’s next three meals will each contain some 12oz ribeye steaks. The second meal is made with more rice, while the third is eaten with a very large sweet potato. For his fourth meal, Shaw has more rice but adds some carrots in with it.

At this point, it is time for Shaw’s son to come home from school. Subsequently, they share a meal that Shaw refers to as the “Monster Mash.” This is just some ground up ribeye steak, and rice. At this point, he will head to the gym for about 3 hours, where he drinks a carbohydrate and amino acid shake throughout the session. Following that, he enjoys another protein shake.

For his last meal of the day, Brian Shaw has yet another ribeye. Again, he couples that with another giant sweet potato and some more rice. If he is feeling spunky, he might even enjoy a slice of cheesecake, a stark contrast to Hall’s entire cheesecake in a day.

Wow, what a diet!

Eddie Hall is retired from strongman competitions. Despite this, he did recently tear his bicep. On the other hand, Shaw managed to land himself in a disappointing sixth place at the most recent WSM championship. You can follow Brian Shaw and Eddie Hall on their History Channel show, Strongest Man In History.