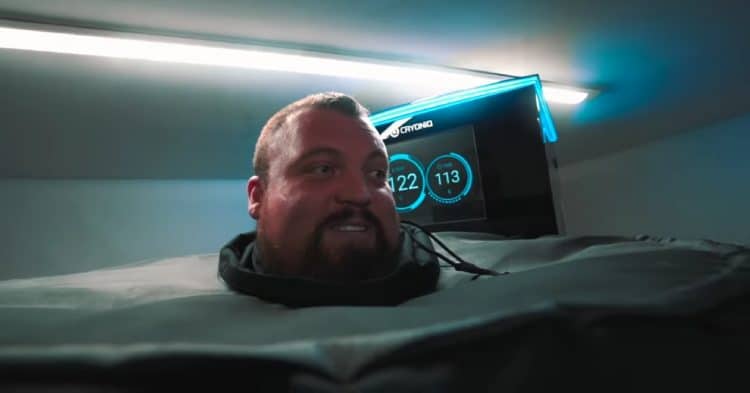 Former World’s Strongest Man Eddie Hall is always looking for the best ways he can add to his training. Now he is looking to add to his recovery by having a cryotherapy chamber installed in his home.

For those who are unaware, cryotherapy chambers are containers that participants stand in, as air that has been rapidly cooled with liquid nitrogen blast their bodies. Each session typically lasts for just a couple of minutes, and the user gets exposed to extremely cold temperatures. The health benefits of cryotherapy are numerous, but in particular it massively assists recovery.

Now it seems that Eddie Hall is looking to save a bit of time and money, by having a cryotherapy chamber installed in his house, rather than having to go to a facility for the process. He took to his YouTube channel to detail the process, explain why he like cryo so much, and try out his new tank. It all starts with liquid nitrogen.

“This is another step in my recovery. I’ve got some more machines coming, but this is one of many that’s on the way. Pretty cool cryotherapy, so it’s a machine you go in, it freezes you to -140°C for three minutes. It shocks the system, and it’s got loads of benefits.”

As Hall explains, the liquid nitrogen, though dangerous, is an integral part of the process. Once his tanks were filled, the next day saw the chamber installed. This finally gave Eddie the opportunity to give his new recovery tool a try.

After making sure that he was not too heavy, and getting a bit of a tutorial, Hall gets in the tank. They pre-cool the machine, and Eddie gets in. You can see the temperature dropping rapidly as he is in the tank, and hear him shivering as he speaks.

After getting out of the machine, the body of Eddie Hall is red, but he says he feels good. The effects are noticeably immediately, but the man who set up the tank explains that the benefits extend from recovery to improved sleeping and more. Moreover, it can help your body burn up to 800 calories, as your body produces more heat to make up for the extreme cold. Cryotherapy is a new and growing form of recovery, and it is cool to see him have one in his own house.