The 4x World's Strongest Man champion had an unfortunate mishap during bench press training but thankfully, it didn't appear to be very serious. 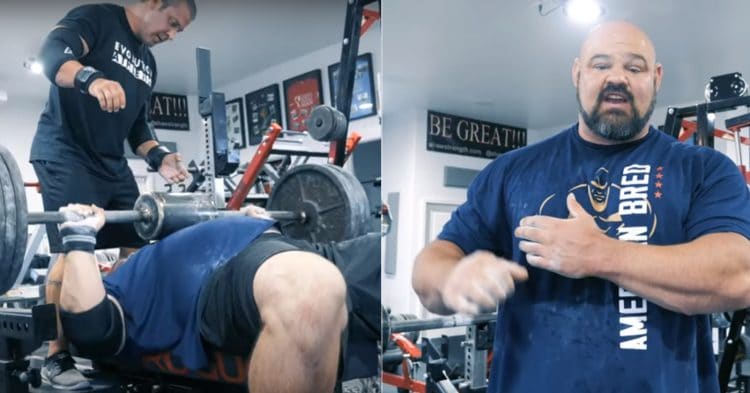 The current health situation hasn’t affected 4x World’s Strongest Man Brian Shaw one bit as far as training is concerned (although, it certainly helps to have a $500k home gym). In fact, several months ago, Shaw decided to set on a journey to hopefully achieve a 701lb/318kg bench press sometime in the somewhat near future.

That’s a huge number to hit and is only 69 pounds less than the current raw world record of 770lbs held by Julius Maddox.

But Shaw has been making some very impressive progress easily bench pressing well over 500 pounds currently. So, he and his training partner for the session, Tyler Stickle, did a session recently where they started with some presses using a shoulder saver bar that decreases the range of motion and weighs 65 pounds. They also included chains at the ends of the bars which adds weight as the links leave the ground and decreases it during the lowering of the bar.

They started with 245lbs on the bar plus 60lbs in chains and progressively increased the weights for several sets. Then it was time for Shaw to do his set with 515lbs/233.6kg plus 60lbs in chains. He managed to complete 3 reps but this is where he felt something in his right pec pull after the bar drifted back during the second rep which he explained in the video.

“I don’t think it’s super bad but I what will say when you have things like this come up and your body is kind of telling you hey, something’s wrong, at that point you don’t want to push through the rest of the training.”

This was a really unfortunate situation, although, it definitely could have been more severe. Shaw said he was still happy to have been able to complete the reps but the smart thing to do was to just stop and wait to see how bad it was. He had to skip some other training that he planned for that session as well.

But was able to do some arm training which he was going to do after anyways which you can also see in the video although it was brief.

Shaw ended by explaining a little more about what happened and how he was feeling. “I’ve got some mixed emotions about today“. He thought he moved the weight pretty comfortably too on his last set but it’s a lot of weight which definitely increases the chances of injury.

“That’s kind of something that’s a little disappointing I’m started to get some tightness now where I’m having a  little bit of trouble opening that pec up”. I can tell that I definitely strained something a little bit, unfortunately.”

Shaw said that he didn’t think it was anything really serious though.

“I don’t think it’s anything super major or that’s going to hopefully hold me back. With that just got to be smart get the treatment done work on the recovery and let the muscle heal up a little bit.”

He’s hoping to hopefully come back soon and start training again or give it a few weeks. Not to mention, he’s still training for the 2020 World’s Strongest Man competition which should take place later this year of all goes as planned.

Watch the video below and or go to the 6:30 mark for the set…

Related: Brian Shaw Gets Steamy With Some Hot Yoga For The First Time