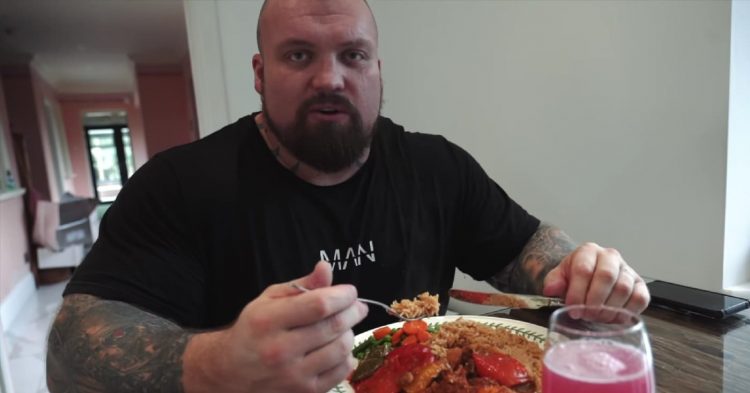 As he prepares for his boxing match with Hafthor Bjornsson this September, Eddie Hall has been following a strict diet to cut weight. However this diet is still bigger than most bulking plans.

One of the more interesting things to watch as Hall prepares to make this move to boxing, is how much weight he has lost. A big part of this is a natural result of Eddie going from strength training, to a more cardio-based style with boxing.

However another thing that has helped the former strongman champion drop pounds, is his change in dietary practices. He broke down some of this in a recent video to his YouTube channel, where he shared his cutting diet ahead of this boxing match.

Related: WATCH: Strongman Robert Oberst Eats As Much Sushi As He Can (15,000 Calories)

The first thing that Eddie Hall does in the morning, is eat a ton of vitamins. From there, he moved to a protein shake, having two scoops of whey isolate with a bottle of water, which accounts for 200 calories and 50g of protein.

After this first meal, Eddie moves on to the treadmill for a mile and a half of walking and running. Here, he spends time watching boxing while he does cardio, studying tape of similar fights to he and Thor.

“What I like to do every morning, because obviously I’m on there treadmill, staring straight at the tv, it is really good to sort of do my homework,” Hall explained.

After doing his treadmill work, it is time for Eddie Hall to have a proper breakfast. This is made up of either ribeye steaks or ribeye burgers, cooked with butter and covered in cheese, all of which is lactose free.

Today it was burgers, as well as rice crispies with lactose-free milk. This gives him a total of 900 calories, with 100g of protein, all while he raves about the benefits he has gotten from cutting out the lactose in his diet.

Before heading to his first weight training session of the day, Eddie Hall has a selection of vitamins. Among these, is the likes of amino acids, vitamin K, vitamin C, omega-3, and more, washed down with fish oil. He takes a slew of these two or three times a day.

Another part of his supplement routine, is about 50 grams of essential amino acid powder, along with a liter of cranberry juice. This gives him another 100 calories, and 100g of protein.

“It’s important to get carbs in, not much, but just a little bit of carbs through your session. Of course, the best way to fuel a session is beforehand,” Hall said.

After this, Eddie starts his workout, which is a deadlift session this time around. Halfway through, he has a whey protein shake with water, for about 440 calories and 200g of protein.

Once he has spent about two and a half hours training, he eats lunch of jerk chicken with rice cooked in chicken stock, and vegetables. He tops this off with another round of supplements, as well as an electrolyte tablet. This is larger meal, that contributes about 1000 calories and 250g of protein.

After having lactose-free yogurt for dessert, with 130 calories and 255g of protein, Eddie Hall takes a bit of a nap. He then wakes up, just in time for another meal before his boxing training.

“This is the thing about being an athlete, is you have to eat every couple of hours. At least every two hours you need to get some form of protein and carbs in. It’s important,” Hall explained.

Eddie says he has a protein shake an yogurt after his physio session. The last real meal of the day is made of chicken, potatoes, and vegetables, for about 1200 calories and 410g of protein.

As he ends the day, Eddie Hall concludes with a final protein shake, which leaves his grand total at a whopping 5770 calories for the day. The fact that this is a cutting diet is insane, considering how this is more than most people eat to bulk up.

Of course, Eddie is not expected to have a traditional diet, so this was interesting to see. Nearly 6000 calories or not, there is no denying that this diet is working on some level.

Eddie Hall is widely considered to be one of the best Strongman athletes of all time. His unparalleled tenacity earned...