WATCH: Strongman Robert Oberst Eats As Much Sushi As He Can (15,000 Calories)

Watch as Robert Oberst puts himself to the test by gorging himself on raw fish and rice, all the way to the point where he breaks his booth 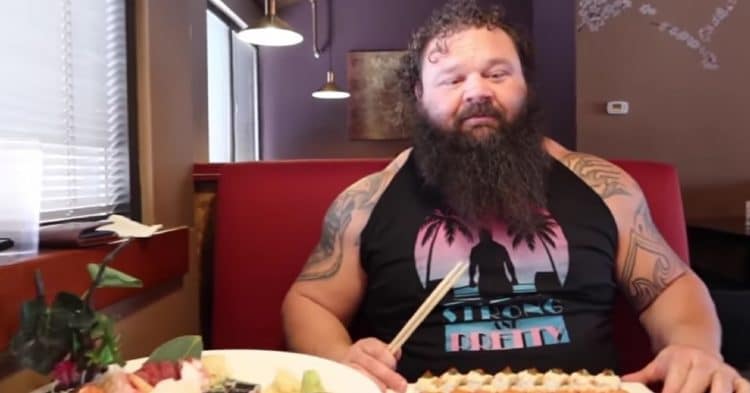 If there is one thing that people never seem to get tired of seeing, it’s watching strongman athletes push their bodies to the limits with food challenges. Robert Oberst proved this true once again, by taking on a brutal sushi challenge that left him unable to finish.

From a dietary standpoint, strongman defy the logic of what elite athletes can and do eat. While they do have to watch what they eat to a certain extent, most of these guys are huge plodding figures that are much less strict on their diets than other elite athletes.

This has opened the door for the likes of Oberst and other strongman athletes to put themselves through various challenges related to food. Whether it be eating a ton of burgers, or mind bendingly massive cheat meals, fans always seem to love watching these guys gorge themselves.

Recently, Robert found himself in another one of these situations, as he decided to push the limits on how much sushi he can consume in one sitting. He recorded the process and uploaded the insane results to his YouTube channel.

“You guys are going to get to see how much sushi I can eat. What do you guys think? It’s going to be crazy,” Oberst said.

After going inside the restaurant and sitting down at the table, Robert proceeds to order what one can only assume is everything on the menu. It even got to the point where the waitress commented about how much food he was eating, as he ordered meal after meal.

“That’s how you order. She’s like ‘That’s a lot of food.’ She didn’t trust that we were going to eat it, so I’m going to have to house this stuff, for sure,” he said.

When the food arrived, Robert Oberst joked about how he thought there would be more food, before mixing up some soy sauce and wasabi. Then he got to work on the sushi, eating plate after plate.

After a showing his technique of eating two pieces of sushi at a time, he cut to the end, when he was done eating. It was at this point that he leaned back, and accidently broke the booth he was sitting in.

Luckily, Oberst fixed the booth and then went back to assess the damage, in terms of how much food he ate. Sadly, he was not able to eat everything he ordered, despite how hard he tried.

“You know when you eat so much of a good thing, all of a sudden that good thing sounds terrible? I believe I just did that to myself,” he said.

“I’m so full. That stuff was amazing. If you guys noticed, I’m not totally clear. I can’t lie. I just can’t put anything else in.”

Robert Oberst took him the remainder of his sushi to eat later. All in all, he managed to down a whopping 15,000 calories worth, so it’s no wonder that he was not able to finish it all. Either way, that was incredible to watch.

10 Best EMOM Workouts to Burn Fat and Get Fit