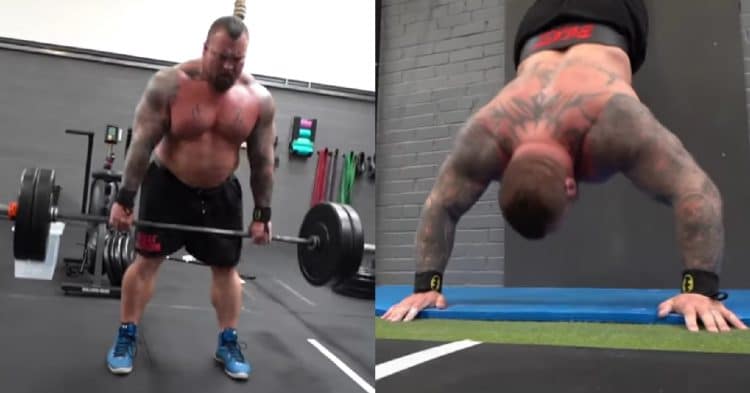 Former World’s Strongest Man Eddie Hall goes by the nickname “The Beast” for a reason. He showed why that is recently, by taking on a workout from the 2020 CrossFit Games.

There is no doubt that Hall is unbelievably strong, as he has proven time and again, both in the WSM, as well as with hitting insane world records. Whether on the field, or in the gym, he has proven to be one of the best athletes in the world. In fact, now that he has been dropping a ton of weight, one could argue that he is in the best shape that he has ever been.

In typical Eddie Hall fashion, he decided to put his athleticism to the test in an interesting way. Taking to YouTube, he decided he wanted to give the “Damn Diane” workout a try. This workout was one of the events from Stage One of the 2020 CrossFit Games, and it goes as follows:

Alongside CrossFit Vlogger Craig Richey, Eddie Hall got to work on the “Damn Diane.” The only difference between what Eddie did and the traditional workout, is that rather than risk injuring his shoulders by doing the regular deficit handstand push-ups, he did a wall walk and kept his toes against the wall, doing the push-ups at an angle and without a deficit. Regardless, he absolutely tore through the deadlifts, which comes as no surprise given his background, and also made easy work of the push-ups. It was done with such a consistent speed and form that it impressed everyone, including Richey, as he clocked in a time of 4:30, only 1:28 longer than Craig’s time.

“Those handstands, and they weren’t even deficits, they just take it out of you from top to bottom,” Hall says as he finishes. “It’s not the shoulders, it’s a lot of core. Wow.”

It was certainly a sight to behold, seeing the 360lb strongman go through these crazy feats of agility. Even though the handstand push-ups were not competition standard, he was certainly able to hold his own, easily exceeding most expectations of someone his size. Typically strongman athletes have a hard time keeping up the pace of CrossFit workouts, given their high intensity, cardio reliant nature, but Eddie manages to do the “Damn Diane” within a respectable time.

What did you think of Eddie Hall and his rendition of this 2020 CrossFit Games qualifier?