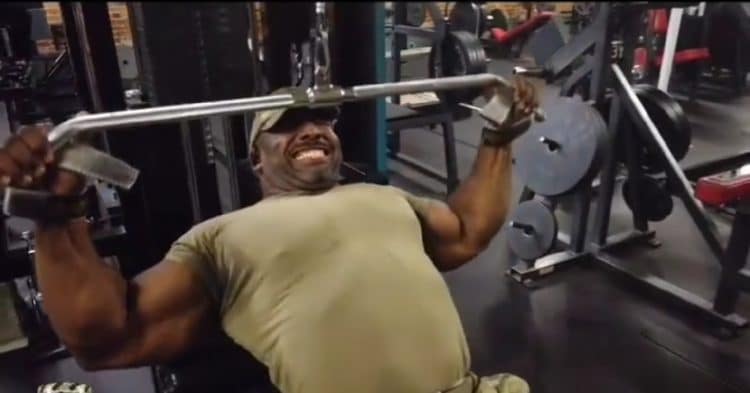 Army veteran and elite bodybuilder Cedric McMillan is hard at work to prep for the Olympia. He recently shared his killer upper body workout, and it shows how much he is pushing himself already.

It has long been thought that Staff Sergeant McMillian has all the potential to be one of the best bodybuilders on Earth, even though he has not always lived up to these expectations. Over the years he has shown some flashes of brilliance, like when he won the 2017 Arnold Classic, but he always seems to fall short on the biggest stages, only scoring as high as 7th at the Olympia. As impressive and respectable as his military career has been, the fans of his bodybuilding can’t help but wonder how his career would have been, had he been able to solely focus on it.

Regardless, Cedric McMillan is proud to be a member of the U.S. military, and loves to flaunt his military fatigues even when he is preparing for the 2020 Mr. Olympia. This was the setting of a recent video that he uploaded to Instagram, where he crushed an upper body workout that would make mere mortals faint. With his son behind the camera, making up for bad grades he got, Cedric gets to work pumping iron.

This intense upper body circuit sees McMillan doing a wide variety of different things. He starts off with some cable work, working to improve his triceps and lats, before moving on to some shoulder and delt work. He can be seen doing some flys and pulldowns, before finishing the session with shrugs. It was a solid session that displayed how hard he is working, as well as just how enormous he already is.

Don’t get confused though, Cedric McMillan knows how to do more than just upper body work. Here he is doing his own variation of lunges, which he refers to as Double-Pump Walking Lunges. These see him holding a weight in his arms as he takes large steps, dipping down twice on the lunge.

In terms of pure physical talent, Cedric McMillan is about as good as it gets. Time will tell if this hard work will pay off at the 2020 Mr. Olympia, but he seems to be pulling out all the stops for his prep. He always has the potential to shock fans, it is just a matter of how he looks on the day.