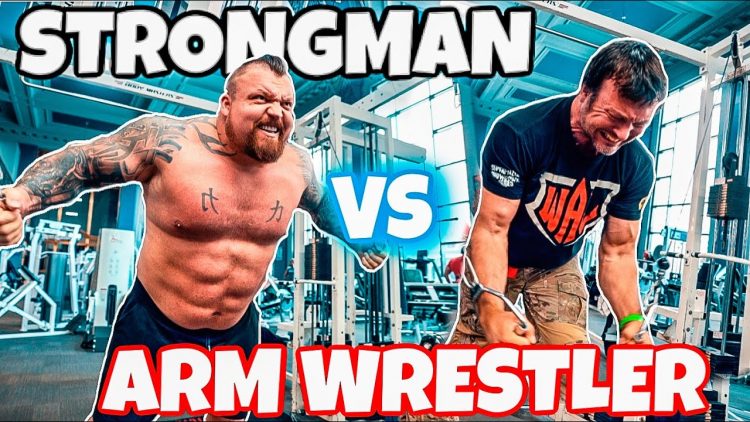 Eddie Hall likes to live life with a set goal in mind. He wanted to become the World’s Strongest Man, so he worked his entire life to that goal. He wanted to deadlift half a tonne, again he worked his life around that one specific goal.  After conquering two of his major life goals, Eddie has decided to try and have some fun in the world of Armwrestling.

So for this occasion, he has joined forces with the best guy in the entire field, Devon Larratt. Devon has been dominating everyone in the world of arm wrestling for the past decade or so and now he united with Eddie to do some impromptu chest day training.

Devon is very tall and very lengthy and due to years of arm wrestling training, he is very awkward when handling normal gym equipment. Which makes for very funny youtube content when seeing him lift. However, he is still exceptionally strong.

After doing some cable flies and dumbbell presses, Devon gives Eddie some arm wrestling tips and training advice.  Also, he gives Eddie the arm wrestling strap and tells Eddie that he should be thriving in this position with his power and strength. Eddie was supposed to compete in  “WAL” Arm wrestling organization’s middleweight division. Now, this is interesting, because Eddie  Hall hasn’t weighed under 150kg since probably his teen years. Which would mean that WAL’s middleweight division is much heavier than the standard middleweight limit of 85kg.

Sadly, Eddie’s arm wrestling debut has now been postponed due to God hitting the pause button on every major sports activity on this planet until further notice.

Beyond Raw LIT Pre-Workout Review for 2022