'The Beast' gets a lesson in arm wrestling from one of the best in the world. 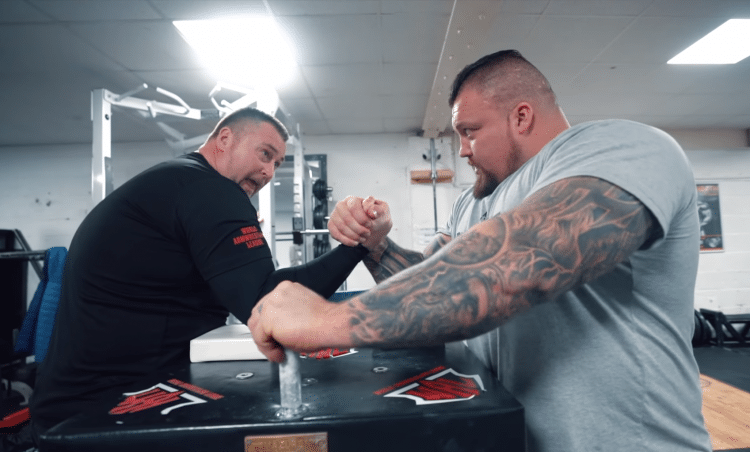 It seems Eddie Hall is taking advantage of his youth by facing any and every challenge that he can think of. But the 2017 World’s Strongest Man champion and deadlift world record holder doesn’t seem to fair too bad against some of the best in the world at their respective disciplines.

Hall recently broke the CrossFit Isabel world record which consists of 30 snatches for time. Well, let’s just say he won’t be returning to train for CrossFit anytime soon as it definitely took everything in him.

But if you’ve followed strength sports lately then you’ll know how popular arm wrestling has gotten with Larry Wheels and even Hafthor Bjornsson trying their hand at the sport. Well, Hall recently enlisted the help of legendary 3x World champion Neil Pickup who was kind enough to show Hall a thing or two about the sport of arm wrestling. Because apparently, he’s going to be doing the World Armwrestling League (WAL) which is the biggest arm-wrestling promotion in the world.

Well, Eddie Hall started some beef with Rob Vigeant Jr. according to the video; who just happens to be the reigning and defending WAL middleweight champion. Now, Vigeant maybe around 205 lbs while Hall weighs about 385 lbs at close to the same height just to give you an idea of the size difference.

But Hall has got a serious problem as implied by Pickup… “this is a fella who’s made for the game. He’s like a freak designed by god to rip people’s arms at“. And apparently he’s huge for his weight with muscles in all the right places.

He then explained how arm wrestling is much different than just in arm wrestling size is not necessarily governed by the same parameters, the same criteria (e.g. limb length and leverage).

Eddie Hall then spoke as if he’s very confident about his upcoming matchup with Vigeant Jr… “I’m going to rip his arm off.”

And although that’s not likely to happen against a man who was apparently created by the arm wrestling gods, he’s going to give his best as usual.

Here are the main tips given by Pickup to Hall…

1- Get the Stance right

Stance and position on the table is essential for high performance. Pickup showed Hall how to grip the peg and lock himself in so that he’s able to pull with maximum strength.

2. Keep eyes on your hand

This is an important safety tip according to Pickup likely because you don’t want your head direction to cause your arms and body to shift in a dangerous position.

3. Dominate hand and wrist setup as much as you can

Hand position is very important in arm wrestling and Pickup advised getting a very comfortable grip early on.

4. Supinate arm and push it forward

Pickup explained that arm wrestling is controlled below the wrist and in the palm. He says to engage both of these areas early in the setup. Getting a high grip gives you an advantage.  But he says to not be too aggressive at first and fly under the radar.

Pickup explained how important elbow positioning is… “You’re trying to give yourself maximum mobility on the pad to access as many areas on the pad to utilize for defense or attack“.

6. Find weaknesses in your opponent’s setup

This will obviously place you into a better position to win than your opponent.

Arm wrestling is won by hand and wrist control.

8. Get a height advantage over your opponent using your hands

Height means control and the fingertips lead everything.

9. Relax, breathe and lean back

This is important for getting the upper hand!

Next, Pickup mentioned that the three main systems of arm wrestling, outside arm-wrestling (top-rolling), inside arm wrestling (hooking) and tricep pressing. But for Hall, the safest method is going to be outside wrestling.

This is huge if your opponent can turn your arm then you’re likely done for. Cupping and rising techniques are essential.

That wrapped up the tips for the day but be sure to watch the video for more detail. Eddie Hall was surprised at how many little details go into arm wrestling and he can confirm arm wrestling isn’t just brute strength. But he’s definitely confident about match with Vigeant… “I think I can come in and I think I can hang with the middleweight champion“.

Hall left with… “Rob Vigeant Jr. you little b^[email protected]%, I’m coming for you. Tell your misses to keep my side of the bed warm alright, thank you.”

Taking into consideration his training for the boxing match against Hafthor Björnsson, Eddie Hall has lost a lot of weight,...