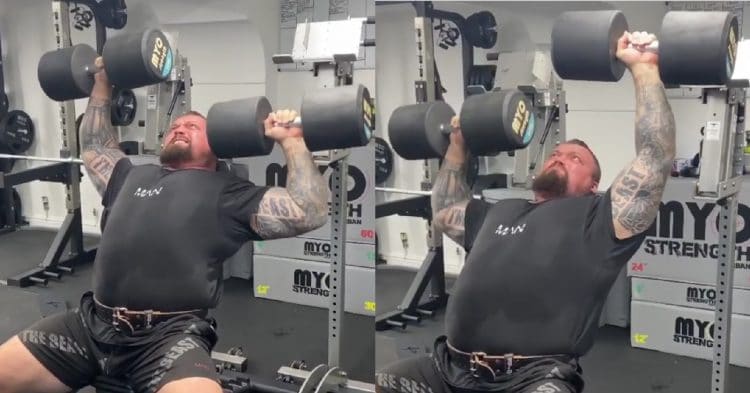 With the training he has been doing for his upcoming boxing match, Eddie Hall has been slimming down a lot. That being said, he showed recently that he has not lost any strength in his arms, by doing some crazy isolated dumbbell presses.

If you were to look at Eddie’s recent training sessions, there is no reason to be anything less than impressed. In the early preparations of his boxing fight with rival Hafthor Bjornsson, he has lost a ton of weight, and looks to be improving his conditioning. All the while, he has managed to keep the explosive power that he is known for, as well as improving hand speed.

With the weight that Eddie Hall has been dropping, you may be concerned about him losing a bit of muscle along the way. However he proved that to not be the case recently, with a post that he shared to his Instagram. Here he can be seen doing eight reps with each arm on a 180lb isolated dumbbell press.

This is not an easy lift for anyone to do, but Hall makes it look easy to rack up eight reps. Admittedly he struggled with the final rep on both arms, but considering how hefty the weight is, it can be forgiven. Either way, it is clear that he is still packing a ton of power.

There is still a long way to go before Eddie Hall boxes Hafthor Bjornsson, with the fight being nearly exactly a year away. Nevertheless he is seemingly putting a ton of focus into this preparation, even as the months roll by. It will be exciting to see what balance he finds between being trim, and still packing a punch.