The Icelandic Strongman champion talked about his feud with Eddie Hall and will be ready to throw down in September next year. 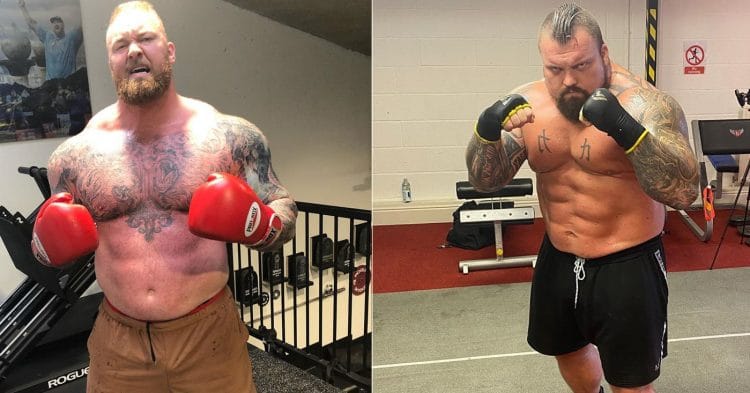 It’s no secret by now that Strongman legends Hafthor Bjornsson and Eddie Hall really have it out for each other. The beef between these two really intensified after their boxing match was confirmed for late next year, Although, it’s probably safe to say that these two behemoths had some beef for a while now.

Because anytime you have two elite champions who have competed at the same major competitions, well, it can result in some bad blood between individuals. Especially regarding the 2017 World’s Strongest Man controversy and the fact that Bjornsson attempted to beat (and he did) Hall’s deadlift world record outside of real competition.

But they’ll get a chance to settle the score soon enough when they meet each other face-to-face in the boxing ring next September. Bjornsson and Hall have been training extremely hard, even sharing some recent training sessions to show their progress.

Consequently, we’d have to expect that there’s a lot of interest in the match which means we’ll be hearing a lot of back and forth via media sources looking to get the inside scoop into their thoughts and plans. So in a recent interview with TheMacLife, Hafthor Bjornsson talked about the situation and we’ve got the details.

The next question was regarding how the boxing match came about between the two.

“Like people know there has been a rivalry between me and Eddie Hall since 2017“.

They both had the opportunity to sign 7-figure contracts with Coresports and that was pretty much how it happened.

Because Bjornsson is a Strongman athlete, transitioning over to training for boxing is obviously going to be different. But at this point, he has won every show possible and feels like it’s time to do something else with his life. Strongman is tough on the body overall and Thor knows that. He acknowledged how dangerous boxing can be but he can drop weight to be healthier. Plus, he really enjoys it.

Although, he talked about how tiring it was to train for boxing twice a day and how he even felt depressed at one point because it was so exhausting. But he backed up a little and restructured his training.

Near closing, Bjornsson explained that he will go into the fight with a champion mindset and his goal is obviously to win. Although, he hasn’t formulated a game plan just yet.

“I want to knock him out that’s my goal. Right now I don’t have any plan, but of course, I will have a plan when it comes closer to a show.”

At about the 14:05 mark, the interviewer mentioned that he also asked Hall about how he envisions the fight will go of which the Englishman responded that he’s going to “fold him in f-cking half.”

So Thor’s response to that was:

“I hope you back it up. If you don’t you’re going to make yourself look like an asshole“.

Watch the full interview below and be sure to check out Eddie Hall’s interview with TheMacLife to hear both ends.