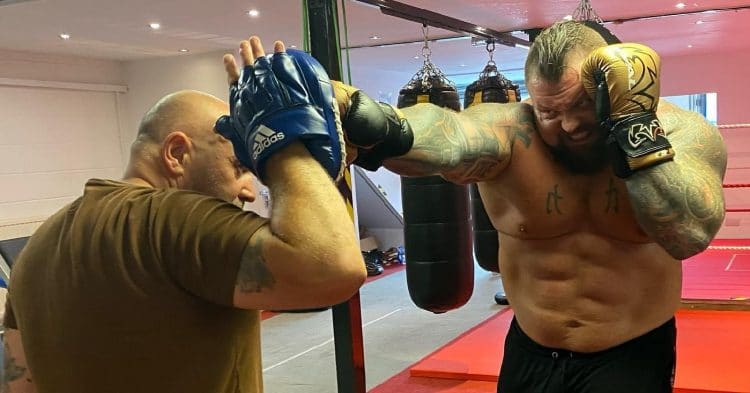 Strongman turned boxer Eddie Hall is working hard to prepare for his boxing match with Hafthor Bjornsson. His most recent training session saw the Beast looking sharp and powerful with his hands.

The boxing match between Hall and Bjornsson is highly anticipated, even though it does not take place until late last year. However this has given both men the opportunity to fully train and prepare for this transition. Hafthor has quit strongman competition to focus his training on boxing, and Eddie has been working his technique and hand speed, looking better all the time.

A most recent training session from Eddie Hall showed just how much his training is coming along. The majority of the video, which he posted to YouTube, sees him working on his combinations, focusing on proper technique with his trainer. However he sent a coy message to Bjornsson at the start of the video, in the hopes that the Mountain was watching.

“Are you watching Thor? By the way, I know you are. You better be watching. This is called training, boxing training. Something you might want to start doing, because you look f—ing awful,” Hall said with a wink.

From here, Hall gets to work on corrective pad work, focusing on making sure his feet are moving, and his punches are coming from the hip. He works various combinations with his coach, and the power shown is absolutely Earth shattering. In fact, it gets to the point that his trainer gets hurt in his shoulder, simply from holding pads for the massive Englishman.

Once he was done with the pad work, Eddie Hall moved around in the ring a little bit. While it was not a full on sparring session, he was drilling his head movement, slipping punches and countering with body shots. He is starting to look sharp with his technique, but he still has a lot of work to do, in particular with his cardio. It is worth noting that the head movement drills came at the end of this training session, but his movement still looked to be quite labored.

All in all, it seems that Eddie Hall is really starting to put things together. There is still a lot of time for him to iron out the rest of his technique, but he continues to lean out and learn proper form. While he never misses an opportunity to mock Hafthor Bjornsson, he most certainly seems to be taking this fight seriously.