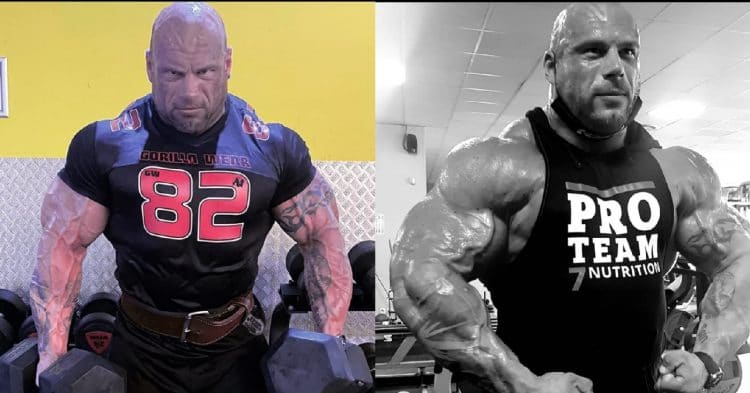 Standing at just 6’3, French bodybuilder Morgan Aste is one of the most massive athletes we have seen in a long time. Most recently he weighed himself, and the numbers he got are unimaginable.

Anybody who is a fan of bodybuilding is a fan of the classic mass monster look. The whole purpose of the sport is to try pushing yourself to the limit, to see how far your body can go. For some specially talented athletes, this leads to some muscle growth that defies logic, making quite the impression on spectators worldwide.

One of the best modern examples of this comes in the form of 37-year old Morgan Aste. While his bodybuilding career is not the most extensive, this IFBB Pro athlete is a massive, beast of a man. According to his own calculations on Instagram, the French athlete is a whopping 371lb, which is not unbelievable in itself, but when you consider he is just 6’3, with not an ounce of fat on him, this turns out to be a mind blowing sight to see.

“Current shape… 371.04 lbs.
With the difficulties of this year due to the health crisis we had to change our plans.
But I assure you we remain focused and will use this period to come back stronger once the situation returns to normal.”

The physique on Aste is absolutely terrifying. He looks every bit of his weight, and the mass is spread evenly throughout his body. However his arms are easily his most enormous muscle group, as their size easily rivals some other impressive bodybuilders we have seen recently.

The crazy thing about Morgan Aste is that his muscles are for more than just looks. He has also spent some time competing as a strongman, where he had some big success in national competitions. Meanwhile he was still on stage as a bodybuilder, continually growing his already gigantic physique.

To be honest, the bodybuilding world has largely transitioned away from these types of enormous mass monsters. Nevertheless it is still always impressive to see someone like Morgan Aste on stage or in the gym, showing off his ridiculous frame. That is not to say that the likes of Brandon Curry and Phil Heath are not giant men in their own accord. There is just something different about the type of gigantic beast of a man that someone like he is, especially when combined with his reasonable height.