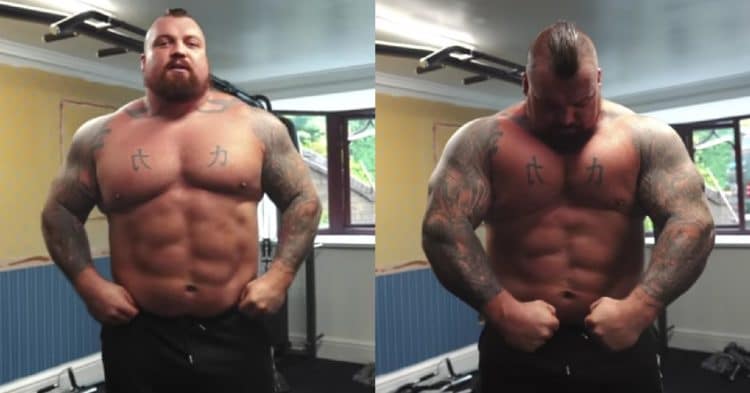 Leading up to his boxing match with Hafthor Bjornsson, Eddie Hall has been looking super trim. He recently showed how his physique is coming along, by doing something not usually seen by someone his size.

From the moment he agreed to box Thor, Hall put all of his attention into preparing for this challenge. He has already put in a ton of work, looking to get in the optimal shape for this fight. This has been working out so far, as he has already dropped some serious weight, clearly putting a focus on his conditioning.

A recent physique update from Eddie Hall, uploaded to his YouTube channel, shows the full extent of how much this work has been paying off. This video not only showed that he is looking trim, but he also displayed his impressive strength, by doing some neutral-grip pull-ups. Although he only does six, this is still more than what the average 6’3, 360lb man can do.

Starting off with some stiff-legged deadlifts, straight arm pulldowns, Hall then goes on to the pull-ups. After that he continues his back workout with some Pendlay rows, single arm twisting face pulls, and hammer curls. He concludes by giving a physique update, saying that he is feeling great at his current bodyweight, and will likely stay pretty close to it.

“I’m feeling pretty good right now, (with my) bodyweight. I weighed myself this morning actually at 164jg. Which, I don’t know how I’m doing it but I’m putting weight on and I’ve liked evidently looking in the mirror that I’m losing fat.”

Saying that he wants to give a physique update, Hall then takes off his shirt. Upon doing so, you can see his six pack peeking through pretty clearly.

“Feeling good, feeling pumped. I feel very, very quick and powerful, which is exactly what I need right now. Honestly, bodyweight-wise I’m happy to stay at this weight, and I’m training at this weight for the foreseeable future. So everything’s on track. Everything’s definitely on track.”

It is super insane to see Eddie Hall looking in this type of shape, ahead of what will surely be an exhausting boxing match. The fact that he can do pull-ups is a testiment to the type of work he is putting in. However if that was not enough to convince you, his physique update us sure to sell his dedication to this preparation.