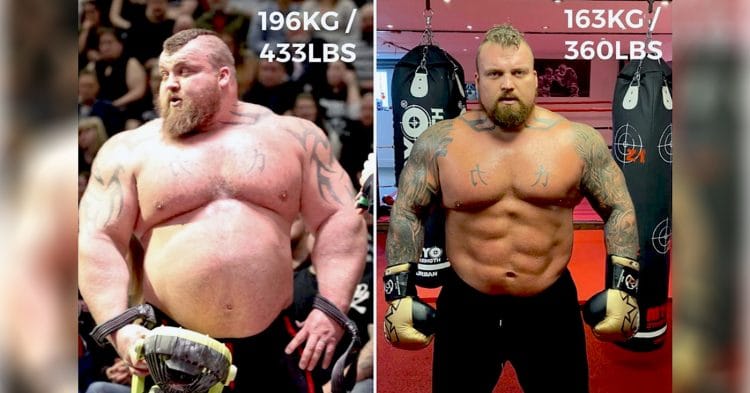 As Strongman legends Eddie Hall and Hafthor Bjornsson prepare for their boxing match next year, the former took to Instagram recently to share his 3-year physique progress. The English athlete who won the World’s Strongest Man contest in 2017 has shared parts of his continual transformation journey and has expressed his desire to get shredded.

Hall has already dropped a good amount of weight from when he weighed 196kg/433lbs and he’s currently down to 163kg/360lbs which is a 73-pound loss.

Check out his three-year before and after…

As you can see, Hall looks much leaner and his midsection is really popping with those washboard abs. Of course, his 100 sit-ups for 30 days challenge to himself could have contributed as well.

But Hafthor Bjornsson has also dropped some pounds as he prepares to battle his arch-nemesis. The Icelandic former World’s Strongest Man champ and 2020 Arnold Strongman winner also recently had a brutal session with former women’s CrossFit champion Annie Thorisdottir to improve his conditioning.

Both men have shared some training footage and so their 2021 bout should be very interesting and draw lots of attention.

But there’s still quite a long way to go, so these two elite Strongman icons should have plenty of time to improve their skills to have the best possible chance of knocking the other out in the ring (that’s definitely what they intend to do).

Bjornsson called out Eddie after he beat the latter’s deadlift world record with a 501kg/1105lb lift last month and things have gotten pretty serious between the two.

But we’ll be sure to update you as the event gets closer and as they continue to butt heads. Until then, check out these clips of them in training.