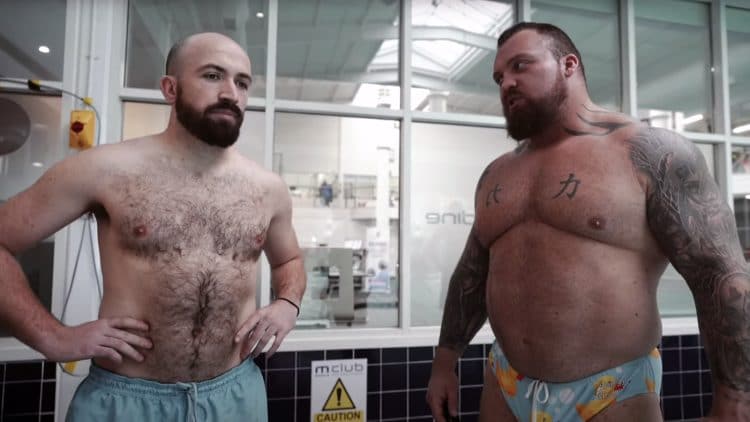 Strongman Eddie Hall has undergone massive body transformation since transitioning to boxing. Hall is on a collision course with archrival Hafthor Bjornsson and both men are training like men possessed to emerge victoriously. Hall, however, lost valuable time to a bicep injury and resumed full training a few weeks back. He is following a rigorous training routine and LADBible journalist Jake Massey joined him recently to experience what a day in the life of Eddie Hall looks like.

Eddie Hall uploaded the video of his day with Jake Massey on his YouTube channel and described it as AVERAGE JOE lived my life for a day. However, it turned out that Massey is a lot more than an average Joe and handled himself quite well through the strenuous day with The Beast.

“It’s going to be a longwinded day, because it’s not just about one session, we’re going to train three times, there’s all the food in between. For most people, I’m 157-kilo right now. For most people to maintain how much mass I’ve got, and do what I do, you’ve got to eat a lot of food. You’ll be eating and then we’ll be training on full stomachs, and people can’t handle that. It’s something I’ve done my whole life.” Eddie Hall warned Jake at the beginning of the day.

The Eddie Hall – Jake duo started their day with a 1.5-mile run. Being a football player himself, Jake felt pretty comfortable joining Hall for the run. That was until his training partner dropped a bomb on him and proposed to run with a 15kg weighted vest. Hall reasoned that boxing is about the posterior chain and pushing forward in the match requires strong glute muscles. Running, particularly with a weighted vest will help strengthen glute muscles and build overall fitness as well.

Following a stretching session to avoid injury and aid with recovery, Hall took Jake for to the first meal of the day:

Eddie Hall and Jake then headed to the pool for a few drills which Eddie Hall explains as a good cardio and recovery session after the early morning run.

“What I’ll do is, it’s basically six sixes. That’s what I’m doing in boxing. Six three-minute rounds. So that’s all I’ll do here today. That’s just teaching my body to be fit for those three-minute durations.”

What followed was a series of resistance band leg drills in the swimming pool. Hall stated that he needs to have a top-up of protein and carbohydrates every 90 minutes and the duo paused the action for a protein shake.

The second half of the day

One hour later, it was time for the second meal of the day. The meal consisted of tacos with plenty of vegetables, and a banana. Eddie Hall proceeded to take an hour-long nap in the hyperbaric chamber. Following this, it was time for a protein shake, an oat bar, and some organic dark chocolate before getting into the boxing ring for a hard training session.

The Beast familiarized Jake with a few techniques and gave some tips on footwork and dodging. Hall challenged Jake to try and punch him in the face. The 33-year-old slipped most of the punches with surprisingly fast head movement and sleek footwork. The day came to an end after two cycles of recovery drills. Eddie Hall admitted that Jake did well for an average Joe and seemed genuinely impressed.

Courtesy of Eddie Hall’s YouTube channel, you can watch the full video here: