Eddie Hall shows off his physique after a recent chest training session, looks to be in tremendous shape ahead of his boxing match with Hafthor Bjornsson 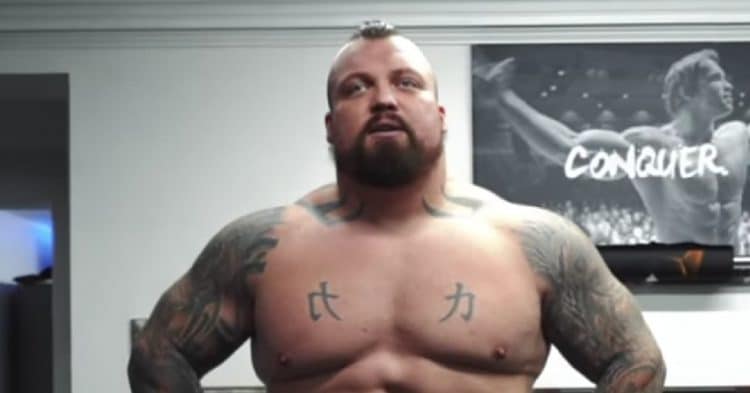 Things seem to be continuing to move in the right direction, as Eddie Hall keeps preparing for his boxing match with Hafthor Bjornsson. A recent physique update from the former World’s Strongest Man shows just how stellar he looks during his prep.

Following the prep of Hall and Bjornsson as they each prep for their boxing match has been quite interesting. Each man has been taking their own approaches to the training process, with Thor bringing in some big names in combat sports to train with, and Eddie continuing to work his cardio and  technique. The boxing match will not take place until next September so it still early to tell who is the favorite, but they both really appear dedicated to learning the craft and improving their skills.

Although it is still hard to make heads or tails of who has the advantage here, one thing is crystal clear: Eddie Hall has been looking incredible. He has been a little guarded when it comes to sparring or anything of that nature, but we have seen him dropping a ton of weight recently. This trend continued in a recent video uploaded to his YouTube channel, where he shows off his physique and weighs in after a hardcore chest training session.

The session begins with some pre-workout from Hall, before he gets to work on the bench press. From there, he throws in some machine fly’s and  a variation of a cable pulldown that sees him using the machine to get resistance on his punches. He concludes with some more cable work, before it is time to shed the shirt and show off his physique. After showing off his abs and joking about making sure he is in the good lighting, Eddie steps on the scale to see the progression of his weight loss.

“I’m at, I reckon, about 162, maybe 161 kilo,” Hall said. “Feeling mega, mega fit. Like the endurance I’ve gotten from the running and the rounds. I’m feeling really good.”

Stepping on the scale, Hall had lost even more weight than he thought, weighing in at 160kg (353lb). As great as he feels and impressive as he looks, Eddie says that he will probably bulk back up as the contest draws closer. He says that his power is not where he would like it to be, and he feels himself getting a little softer than he wants.

“Physique’s looking really good, I’m happy,” Hall explained. “I’d happily fight at 160, I really would. I’m just taking it as it comes. I think I’ll put a bit more weight on, if I’m being honest. As we get closer to the fight, I think I’ll step my game up in the weight room. Of course, the cardio will take a step up, but I just feel as though I’m finding that middle ground with the strength and power, and I feel like I’ve lacked on the power these last few weeks and really concentrate on the boxing. I’ll tell you what, it’s really had an adverse effect in my opinion. I don’t feel I’ve got as much bang in the punches.”

It will be interesting to see how it all comes together for Eddie Hall as the fight approaches. For now, he seems to be in tremendous condition, but it will be fascinating to watch him find the right balance for boxing.