'The Beast' powers through world's heaviest incline dumbbell press with 110kg in each hand. 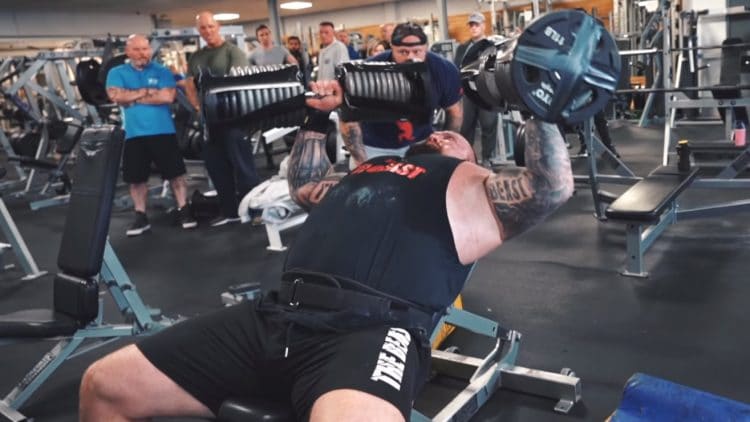 There’s no denying that Eddie Hall lives up to his nickname (The Beast) having won the 2017 World’s Strongest Man competition (in addition to several titles as Britain’s, UK’s, and England’s Strongest Man contests), deadlifting a world record 500 kg (1,102 lb; 79 st) under Strongman rules in 2016, and now… achieving the world’s heaviest (that we know of) incline dumbbell press of 220kg/484lbs (110kgs/242lbs each hand) in a recent training session.

Well, the plan before the workout was to warm up with the flat bench press before hopping over to the dumbbells to work his way up to a maximum poundages. But apparently, things took a turn for the best where he accomplished a mind-blowing feat.

So, Hall started with 50kg dumbbells on an incline, then he went to 70kg per hand, followed by 80kg, before finally tackling the 100kg monsters that he taped additional plates on the end of.

You can watch the setup for his big lift below at about the 2:00 mark if you don’t want to see the rest of the video leading up to it.

Well, there you have it folks… a world record incline press by one of the greatest Strength athletes to ever walk the face of the Earth. And knowing Eddie Hall, he may just try and best this lift sometime in the near future.

But being able to get one rep with this kind of weight is plenty for having bragging rights for a while and he wasn’t shy about rubbing it in Larry Wheels’ face either; who was able to do an incline dumbbell press with 235 pounds in each hand.

6 Tips For A More Commanding Physique