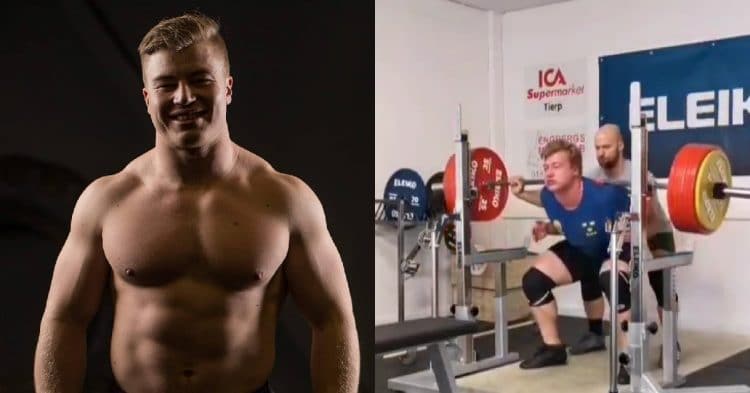 Emil Norling is just 22 years old, but has already been doing some incredible things in the Powerlifting world. Most recently he was seen doing a crazy squat session in training.

Norling is a young powerlifting sensation hailing from Sweden, who currently competes in the -105kg division. He has only been competing for just about four years, but has killed it at every step of the way. Since his third contest, he has gone undefeated, crushing it at all kinds of meets throughout Sweden and Lithuania. To date, his most impressive victory is the 2019 European Classic Championships, where he took the gold in the Open class.

What brings Emil Norling to our attention today was a strong performance in training. A recent post to Instagram showed him getting to work on a 661lb squat. Although judging by the look on his face, and the hesitation before re-racking it, he gave some serious consideration to making it a double. (Translated with Google)

It is quite entertaining to see that moment of decision cross Emil’s face as he holds the weight on his shoulders. He hesitates for a moment, before ultimately re-racking the weights with a smile. Although no prize for guessing how he would do if he did go for another rep.

Norling is used to doing squats for reps. Here is a few weeks earlier, doing a different type of squat training. Instead of focusing on heavy weights he does light weight, high rep training.

Emil Norling continues to gradually get more and more attention for his high skill levels. At just 22 years old, it is exciting to watch how his career develops from here.