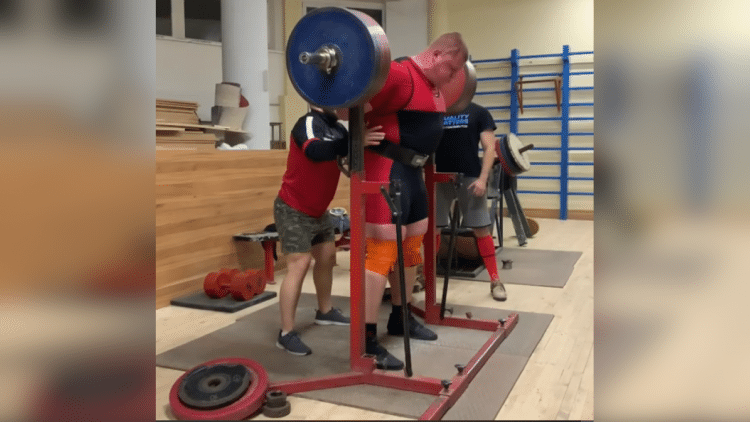 Pavlo Nakonechnyy is one of the most promising young powerlifters in the world today. He further affirmed that, with an impressive recent squat double.

Competing out of the Ukraine, Pavlo has made quite the name for himself, as a +120kg Junior Powerlifter. He has competed in various events in the European circuit. However, he has been taking some time off, having not competed since 2018. Although he did score second in that meet, the European Classic Championships.

Well it would appear that Pavlo has been using this time off to improve. In a recent video, posted to his Instagram, he shows his growth. In the footage, he manages to crush a massive 395kg squat, for a double. Additionally, he manages to do so while making it seem like it was nothing. In fact, his smoothness, and ease is mind blowing, to say the least.

Not only does Pavlo make it look easy, but he says as much in the post. What makes this so impressive, is that his current best competition squat is 380kg. So not only does he lift 15kgs heavier than his competition best, but he does so for two reps. Furthermore, when considering how easy this was for him, its hard to ignore the level of improvement he has managed to do.

As he alludes to in his post, Pavlo is looking to compete at an upcoming World Raw Powerlifting Federation competition. It will be exciting to see how he looks when he hits the stage. With such an improvement in his squat, one can only imagine how the rest of his game has gotten better.

Pavlo Nakonechnyy continues to impress every time he takes to competition. As far as junior competitors go, he is one of the most impressive, and he just continues to get better.