Eugen Sandow was a pioneer of training and nutrition and an icon in the the world of bodybuilding and strength sports. Here are few workouts inspired by the legend. 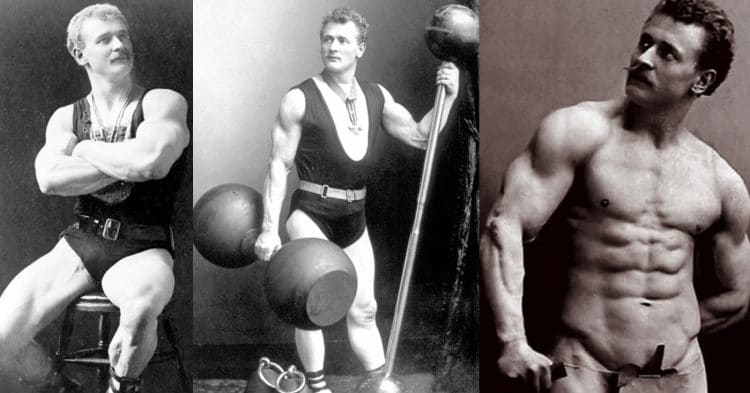 If you’re a bodybuilding fan or familiar with its history, then you’ve likely heard of Eugen Sandow. He was a legendary German bodybuilder and strength athlete from the late 1800s and early 1900s who is an icon in the industry to this day.

Sandow was able to build a very impressive physique naturally which is impressive considering he had much less knowledge of training and nutrition compared to the information we have today. So we put together a Eugen Sandow workout so that you can get acquainted with the methods of a legend.

Who Was Eugen Sandow?

Eugen Sandow (real name Friedrich Wilhelm Müller) was a famous bodybuilder and Strongman who was born in Königsberg, Kingdom of Prussia in 1867. He discovered bodybuilding very young and most notably was believed to have put together the world’s first big bodybuilding competition in 1901 at Royal Albert Hall in London.

In 1885, he left home to avoid serving time in the military and subsequently, became a circus athlete in Europe. It was there, that he adopted the stage name, Eugen Sandow. Not long after, he was mentored by Ludwig Durlacher, who was known to coach several rich and famous individuals.

Durlacher suggested Sandow entered a Strongman competition in London a few years later of which he not only won but upset the reigning champion. This victory made him a superstar in the world of strength sports and eventually, there was a lot of interest in him displaying his muscles at events along with performing feats of strength.

Sandow eventually founded many Institutes of Physical Culture throughout the UK where he educated many on training, nutrition, and also helped train members of the British Army. Here he innovated and became a pioneer for certain methods of which he introduced to the world through tours.

He also offered a monthly publication initially called Physical Culture although it was eventually renamed, Sandow’s Magazine of Physical Culture. Not to mention, he wrote several books that were published, where he offered his expertise of which ‘Strength and How To Obtain It’ is quite possibly his most popular piece.

Sandow was also one of the first to intentionally develop his physique based on the ideal proportions of Greek statues and is known as the ‘Father of modern bodybuilding’. He was even what many would call a “sex symbol” having often posed in minimal to no clothing.

He married his wife Blanche Brooks in 1896 and had two daughters, Helen and Lorraine.

After a very illustrious career, Sandow passed away in Kensington, London in 1925 due to what was believed to be caused by an aortic aneurysm.

A bronze statue of Sandow has been awarded to the winner of the prestigious Mr. Olympia contest every year since 1977, and it’s referred to as “The Sandow”. This is undoubtedly the most sought after trophy in bodybuilding.

Eugen Sandow was very creative with his choice of exercises and was definitely ahead of his time. He was a big proponent of using dumbbells to sculpt a physique and we’ll think you’ll find that the movements he used to do were quite unique.

“Nothing, in my opinion, is better than the use of the dumb-bell, for developing the whole system, particularly if it is used intelligently, and with a knowledge of the location and functions of the muscles.” – Eugen Sandow

Sandow also believed in full-body training and therefore used a decent selection of movements to accomplish this. Now, it’s believed that he’d use very light weights such as 5lb dumbbells for a very high number of reps (120 reps). Although, there are conflicting beliefs about whether he actually “regularly” used such light weights to build his physique.

Eugen Sandow could raise a 269-pound barbell overhead in the bent-press movement. He held a 56-pound block weight in each hand and performed standing back somersaults. Another feat was to perform a one-arm chin with any single-digit, including his thumbs. Men and women raved over his features and physique. Photograph from the collection of Bill and Judy Pearl. Excerpt from Bill Pearl’s Legends of the Iron Game.

The following exercises/workout is from the previously-mentioned book (Strength and How To Obtain It) that he wrote 120 years ago. Sandow identified them as light weight exercises.

But he did also recommend adding 2lbs (1kg) for each exercise after completing the 120 reps. Keep in mind though, we’ve advanced a lot since his time and definitely wouldn’t recommend this type of workout if you want to make serious progress. Although, it’s not bad for improving muscular endurance and just trying out a legend’s routine.

Use a weight that’ll allow you to complete all prescribed reps. The following workout is meant to be done daily but, of course, this isn’t realistic for everyone. So, maybe try it a few times per week and see how it works for you.

The alternating dumbbell curl is a staple exercise for biceps training. Sandow would do these (and other curl variations) with bent knees and make sure to fully extend the arms during the negatives.

The reverse dumbbell curl from what we know currently, works the brachioradialis muscle that is a more dominant elbow flexor compared to the basic bicep curl, when the hands are pronated.

To do this exercise, stand with the dumbbells by your sides with knees slightly bent and then raise them up laterally to shoulder level. Turn your palms up and curl one dumbbell toward your head so that it’s above the shoulder. Fully extend your arm back out literally. Alternate arms and maintain the upper arms parallel to the floor during the exercise.

Sandow notes that this exercise also works the deltoids and triceps when done properly.

This is the same as the previous exercise except you’ll curl both arms simultaneously. Although, Sandow explained in his book that you can do a variation by bending slightly forward and curling the dumbbells inward and under the armpits/shoulders.

Then you’d still extend your arms back out similarly.

While Sandow did these standing with dumbbells, we recommend doing the standing cable variation or using dumbbells while lying on a bench. We also changed the reps to 10 rather from what was originally 5.

Sandow said that this exercise opens up the chest, allowing for better mobility. 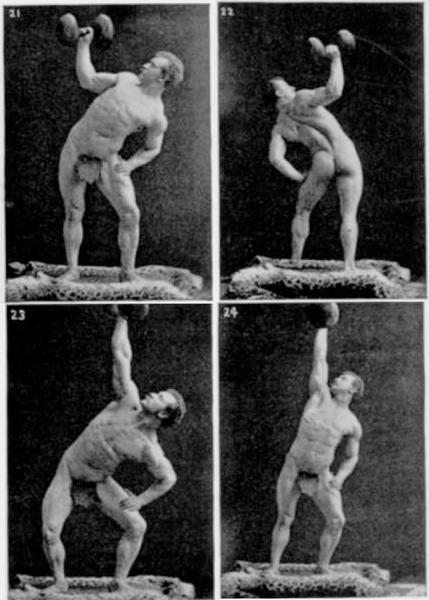 The photo above shows the bent press or corkscrew; a shoulder press technique that was commonly used during his time to lift heavy weights.

But you can just do the standing shoulder press using dumbbells. Note: The link shows a one-arm press but for the exercise, use two dumbbells and a neutral grip.

Again, Sandow believed that this exercise opens up the chest and improves mobility. 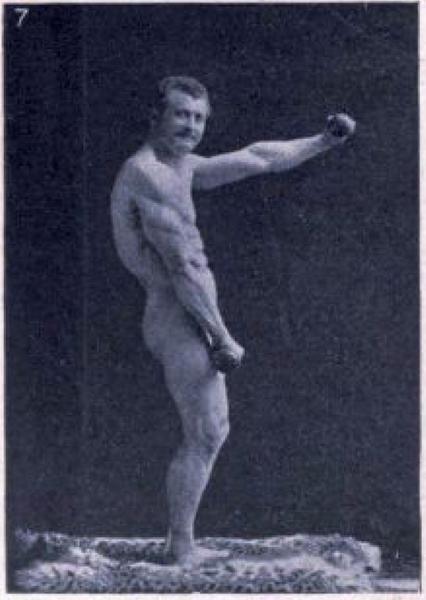 This alternating front raise works the front head of the shoulders.

This exercise was utilized by Sandow to loosen up the wrists.

To do it, use a really light weight. Stand with your arms shoulder height and laterally to your sides then rotate your wrists back and forth. Alternatively, you can bend your wrists forward and backward.

The body position is the same for this exercise as for the previous one. But we recommend using a small dumbbell or two small weight plates.

You want to hold the weights out with arms extended and then rotate the right hand clockwise and the left, counterclockwise. Sandow advised these for flexibility, strength, and endurance of the forearms.

The next exercise (you can try it) on his list was this same exercise but you’ll rotate both hands in the opposite direction now.

An interesting exercise that combines two movements in one, the shoulder lunge is performed by stepping forward with one leg bending at the knees as you’d normally do while doing a front raise with the opposite arm. You’ll alternate switching between the left leg lunge and right arm raise and the right leg lunge, left arm raise.

Push-ups are great for working the chest, shoulder, and triceps.

Because Sandow used a different contraption for these, here’s a link for the basic weighted push-up.

Sandow believed sit-ups were beneficial for individuals carrying excess body fat and believed it was effective against fatty formation.

We recommend sit-ups on a decline bench with leg support pads. You can add a little weight by holding a dumbbell or weight plate near your chest or with arms extended above.

Squats are a very effective lower body exercise that works all leg muscles and the core muscles.

Side bends are a good exercise to work the oblique muscles which are part of the core and responsible for trunk rotation. Sandow says to do these with or without weights.

He used to do these because he believed they would give flexibility to the backbone and promote the circulation of the feeding veins of the stomach and liver.

If, for nothing else, you had access to a Eugen Sandow workout that was created over 100 years ago. If you’d like to give it a try then by all means it’s all laid out for you with the details. Again, this isn’t a routine that we’d recommend you stick to for an extended period of time but it’d be fun to give it a shot and maybe incorporate it a few days per week to see how it works.

Sandow was an absolute legend that was impressive even by today’s standards and it’s impossible to forget about his achievement and contributions.

How many exercises do you do per workout? Four? Six? Ten? More?! While variety plays a vital part in building...

Lifters love to lift heavy weights. It’s arguably the most satisfying thing you can do in a gym! Lifting weights...