After being forced out of the 2020 World's Strongest Man, Evan Singleton provides an update on the bicep tear that forced his withdrawal 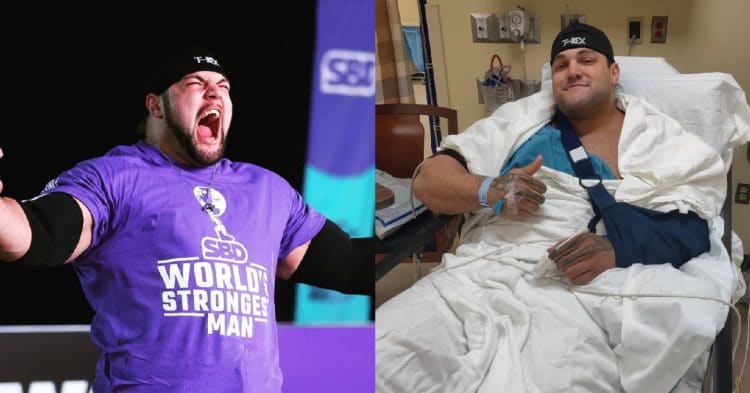 Evan Singleton was among multiple strongman to be forced out of the 2020 World’s Strongest Man with an injury. Now a few weeks later, he has gotten surgery and seems to be doing well in recovery.

When former professional wrestler Singleton revealed that he would be making the move to strongman, fans were intrigued to see how he would perform. Making his debut in 2018, it has been a strong and rapid rise to prominence in the sport for the man known as “T-Rex,” going on to win the 2019 Giants Live North America. It even led him to an invitation to the 2020 World’s Strongest Man, where he looked to make a splash in his first run at the biggest contest in all of strongman.

Unfortunately the WSM debut of Evan Singleton was cut short at the end of the qualifiers. Before he could try to earn a spot in the finals, he would suffer a bicep tear that he was expected to get surgery on. A few short weeks later, and he has successfully gone under the knife. Posting to Instagram, the American strongman shared an update from the hospital, saying that all went well with the procedure, and that he should be back up and going soon enough.

“Surgery was a success!! Bicep tendon is officially reattached!! Thankful to absolutely everyone that reached out to me wishing me luck and showing support. I really appreciate every message. Now to begin recovery and rehab! I’ll be back stronger and better than ever!!!! Happy Thanksgiving everyone!!!!”

It is good to see Evan Singleton in such good spirits after this injury. He will surely be back next year, and will hopefully show some serious. He had shown some good things during the qualifiers, even making it to third place in his group by the end of Day Two. He was set to do an Atlas Stone series against Mikhail Shivlyakov to see who would go to the finals, before the injury stopped this from happening.

While the ending was certainly display, Evan Singleton performed admirably at the 2020 World’s Strongest Man. He is still early in his strongman career, but it looks like the future is bright for him. Hopefully he can heal properly and be back better than ever next year.