Eddie Hall continues to look sharp in the latest update of his training for the Hafthor Bjornsson boxing match, blasting his training partner with hard body shots. 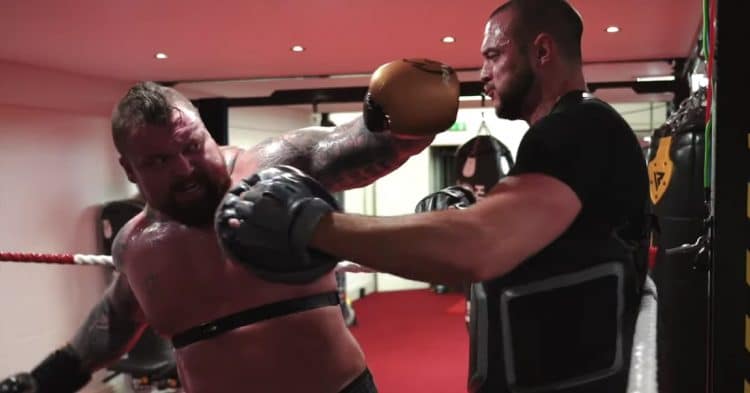 We have already seen that Eddie Hall is getting in fantastic shape for his boxing match with Hafthor Bjornsson. Now we get to see how his technique is coming, and it is scary to say the least.

With less than 12 months to go until his highly anticipated boxing match, Hall has already gone full force into his training and preparations for the contest. He had the slightest amount of amateur level fight experience, but he is still devoted to learning the skills needed to be successful in the ring. So far, the most impressive aspect to his training has easily been the way his physique looks from all the cardio training he has been doing. His most recent update saw the Beast at an absolutely shredded bodyweight of 355lb, with his abs showing through nicely.

However it is about more than being in great shape, and Eddie Hall knows that. There is also a fair amount of technique needed to put him in the best position to perform properly. In case you were not convinced that he was working as hard as Thor to hone his skills, he posted a video to YouTube to prove you wrong. Here the Englishman gives a sneak peek into his training camp for the fight, showing off some of the hard-hitting combos he has been working on.

“I’m not, by any means, fresh in the slightest,” Hall explained after detailing the hard chest workout he did earlier in the day. “But I’m still here and I’m still willing. I have not missed a boxing session in five months. Not one.”

After a bit of a warm-up, Hall jumps in the ring and begins working on his combinations. For nine three minutes rounds, he goes absolutely all out, working on slipping punches and getting inside to land damage. Not only that, but he is working on ways to push his opponent against the ropes and in the corner. He is not actually connecting with any head shots, but the shots to his training partner’s body is enough to hurt him yet again, despite wearing protection. They even comment afterwards about how Eddie is willing to keep going, but it’s his training partner that needs to quit.

“It’s coming, the fitness is coming more than anything,” Hall said after the workout. “Just working on these combos, getting the hand speed, the footwork. Unfortunately I’ve got no head guards, no mouthpiece yet but I think we’re too early at this stage. I need to learn how to box first before I start landing head shots, but they’re there. I’m preempting them, I’m having to stop. It’s teaching me self discipline. It’s teaching me to take that half a second to think about a punch, which is good. Sometimes thinking too quick can nullify your power so I think what I’m doing now is quite strategic, it’s good.”

That being said, Eddie Hall still got a bit of constructive criticism from his coach after the session, with the pair discussing what he will be working on next. It seems that the strongman is really respecting the sweet science of boxing, and is taking this prep very seriously. The more these men are seen training, the more excitement builds for their fight.

Big Ramy Arrives In United States Ahead Of 2020 Mr. Olympia