The former pro wrestler shows that he isn't letting a little setback stop him from going full beast mode! 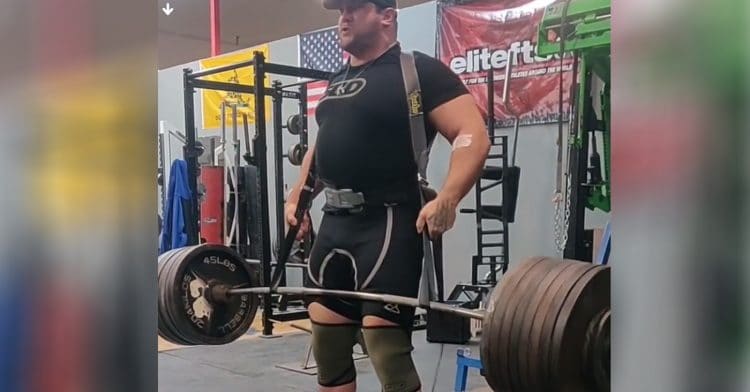 It was his debut at the prestigious event but after completing a series of events, he was forced to withdraw after incurring the injury at the end of the qualifiers, before undergoing surgery shortly thereafter.

But he has nothing to be upset about, having begun Strongman in 2018, then going on to win the 2019 Giants Live North America, and being invited to compete at the biggest contest in the sport of Strongman.

Injuries are a part of being human and many times, inevitable as a high-performance athlete, and most experience a setback at some point.

But he’s recovering very well and is determined to keep training like a beast. And we have to say, he looked like one recently after pulling 805lbs/365kg without gripping the bar. Although, he did have someone of a grip on the lifting aid.

It’s common for strength athletes to train the deadlift using this technique.

In fact, we say Larry Wheels deadlift 937lbs/425kg with no hands after tearing his biceps before competing in Strongman.

But Singleton wanted to try it out “just to see if he still had it“. He did make it clear that he wouldn’t be doing this often but it’s a great test of strength at a disadvantage.

“Just to see if I still had it. Found out I was able to pull heavy ish with no hands lol. Definitely won’t be doing this often but definitely happy that I can still pull with a bum wing. Never gonna stop working hard and with all that happened because of my arm tearing I’m meaner and hungrier than I’ve ever been

All he can do now is recover and continue to do what he can. But it’ll be exciting to see what he brings to his next Strongman competition.

15 Ways to Avoid Back Pain in The Gym