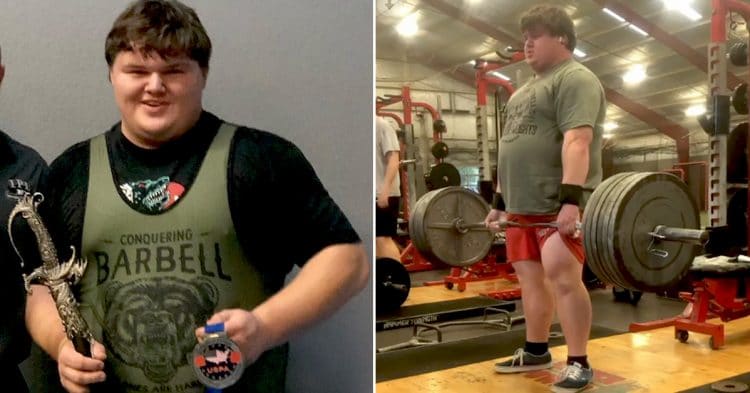 Jackson Powell is doing some incredible things, while still in high school. However, as he explained recently, he has even bigger goals in mind.

Powell is something of a powerlifting phenom. At just 17 years of age, he has set numerous records at a national and global level. This has made him someone to follow, as he seems to have a promising future ahead of him.

However, powerlifting was not always the goal for Powell. As he explained in an exclusive interview with FitnessVolt, he was initially interested in playing football. It was only when he started hitting the gym for this, that he was suggested by his friends to start powerlifting.

“I was initially training for football throughout middle school,” Jackson said. “Then when I came into my freshman year of high school, I had a couple of friends that were like ‘you really need to go and try this because you’re really strong.’ I really didn’t think anything of it, so I went and competed at my first meet, my freshman year, and after that I just fell in love with it.”

Jackson Powell immediately fell in love with the sport, putting all of his focus into it. This has really paid off, as just this past January, he broke every single USPA record for his age and weight class. It was a performance that justified his decision to put his energy into this sport.

Despite being in high school, Jackson does not struggle in balancing his school and work. He actually is usually able to use his school’s weight room to train, and as such can fit it into his schedule. Although when it comes to competition prep, he listens to his body a lot more.

“Going back to my meet in January, the week before the meet I shut it down,” he explains. “I rested, I stretched, I tried to get rested up before the meet. The week before that, I had set all my openers so I didn’t train as intensely. About three weeks out, that’s when I set my bigger numbers. When I set my openers, it was about three weeks out from my comp.

“So between three and four weeks out, is when I try to set my openers. Then I’ll have like a week to set my exact openers, and then I’ll take a week off.”

Although Powell had such a strong showing in January, he is far from satisfied. In fact, he shared with us a massive goal he has in mind.

With this huge goal in the works, Jackson is focusing his training. He is always trying to work on his weaker areas, and improve his overall game. Specifically, he does his best to train everything twice a week, but he knows when to focus on a specific lift.

“Typically my squat I’ll only train once (a week), especially if its a heavy week,” Powell detailed. “But if it’s deadlifts, I may do straight bar one day, and then trap bar a couple of days later. I always try to work in something to work my back, because there’s always need to build strength in my back. And my bench day especially, I try to really emphasize having two bench days a week. Whether one day being a regular comp bench, and the other day being a forward press or whatever it may be. I always try to work something in that’s going to work my bench twice a week, because my bench is my worst thing.”

With his eyes set on the 1000kg total, Jackson Powell sure does have his hands full. Nevertheless, he is focused, and a most recent total of 842.5kg is nothing to scoff at. You can check out the full interview below, where we also discuss his plans for after high school, his diet, what he needs to get through a workout, and more.